oh brother where art thou

I didn’t take one photo yesterday… not even one. No photos of the dogs being good at Uncle Olaf and Aunt Stephanie’s house, none of Olaf in his awesome pool, none of Stephanie helping Carm unload the car (so much stuff for one night with the pups!). Not one photo of our hotdog extravaganza, nor any of the poorly executed Thai ‘drunken noodles’ was taken.

Yes, we spent a night with Olaf and Steph at their place, this time with the dogs. I was a bit stressed out about bringing both dogs somewhere new but they were good pups. We had their crates along and did use them while we had our late supper, but they didn’t mind as by then they were exhausted. I had meant to get them tired out at home with lots of outdoor time, but alas, we had car trouble. Once we got to Mtl we went for a short walk and then battled mosquitos in their fully fenced backyard. The dogs investigated every corner and then crashed in the screen room (note to self, develop an outfit that is 100% mosquito proof!)

Car trouble… Carm went out to take a quick trip to the grocery store and the car wouldn’t start - it was totally dead. We do have a boosting thing but it didn’t have the guts to turn the engine over so after multiple tries Carm called our mechanic. Steve had a super booster so Carm rushed to the shop to borrow it (which worked first try) and then took the car back for a new battery. The benefit of having the same mechanic for 30 years is a bit of special treatment. Before Carm could bat an eye we had a new battery and a perfectly running car :-) Just in time for our epic excursion!

Aside from all that excitement (so much in one day), all has been quiet. I’m tootling along on the knife edge between manic and not manic at all - it’s been going well and I continue to have optimism for the next little while.

The pool was a cool 22C this afternoon but gosh, that water felt good!

“one tiny blue egg balancing in the branches of the cedar”

“Adia lying down at my feet at Olaf’s”

“turning into their driveway”

“turning into our driveway - we’re home”

“those first few seconds in the cold water”

On Sunday afternoon, after weeks of being on the verge of something bad with little spurts of mania to keep me going, I started to feel better and it’s continued on to today! I feel fine! Oh, I don’t have gobs of energy but have scads more than I did the last few weeks. This swing of misery seems to happen every spring but maybe this year it’s a bit shorter. I’ve learned through trial and error to just go with it and not force too much activity - the litany of ‘I should’ doesn’t help. 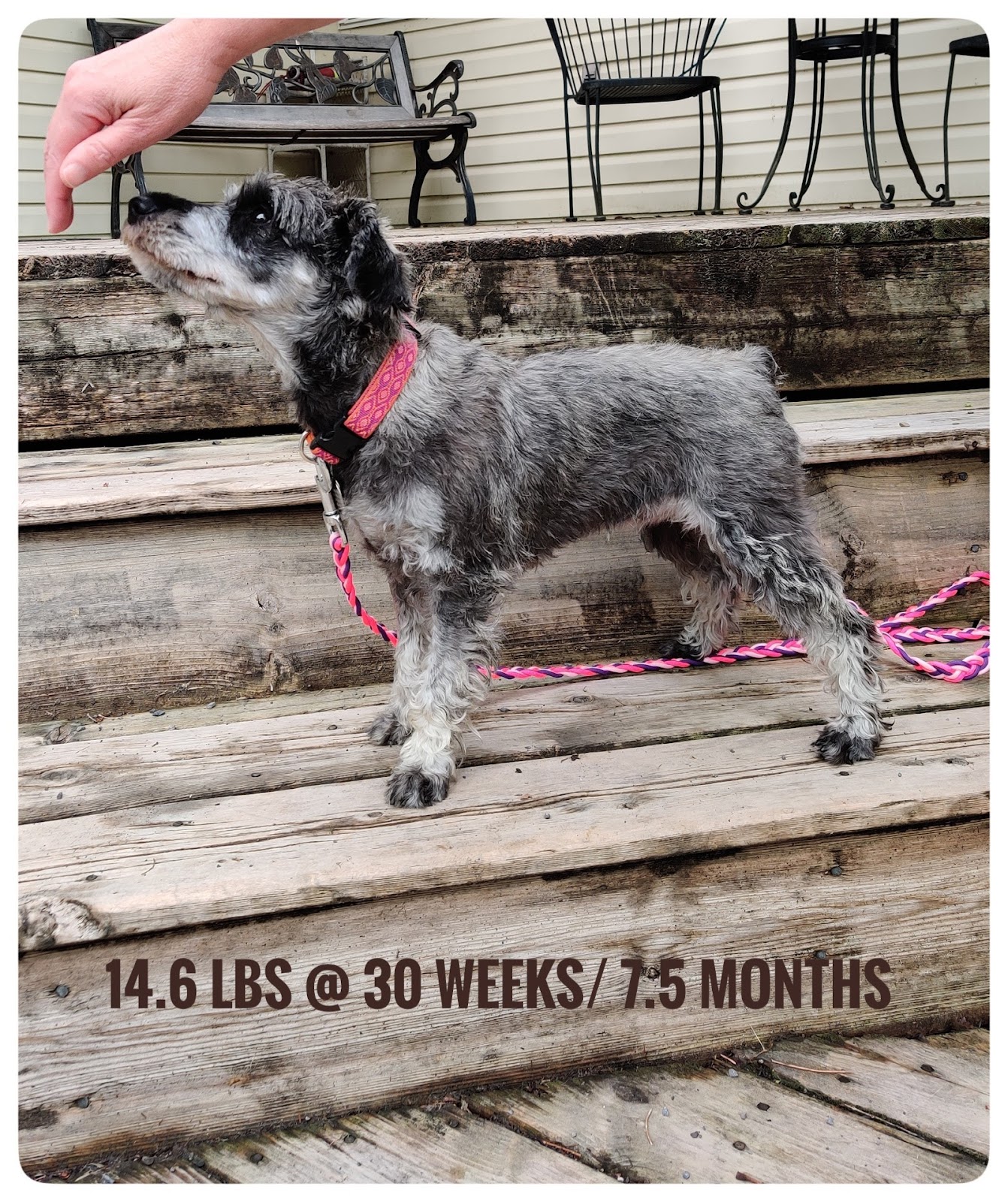 We had Trudie & Leo over for a bare bones supper Sunday night. I was already feeling much better so managed to get supper on the table without too much trouble, although Carm did help. At one point Lupa jumped up onto Leo who doesn’t really care for dogs. I leapt up to get her off but he waved me away and proceeded to give her a little cuddle :-) 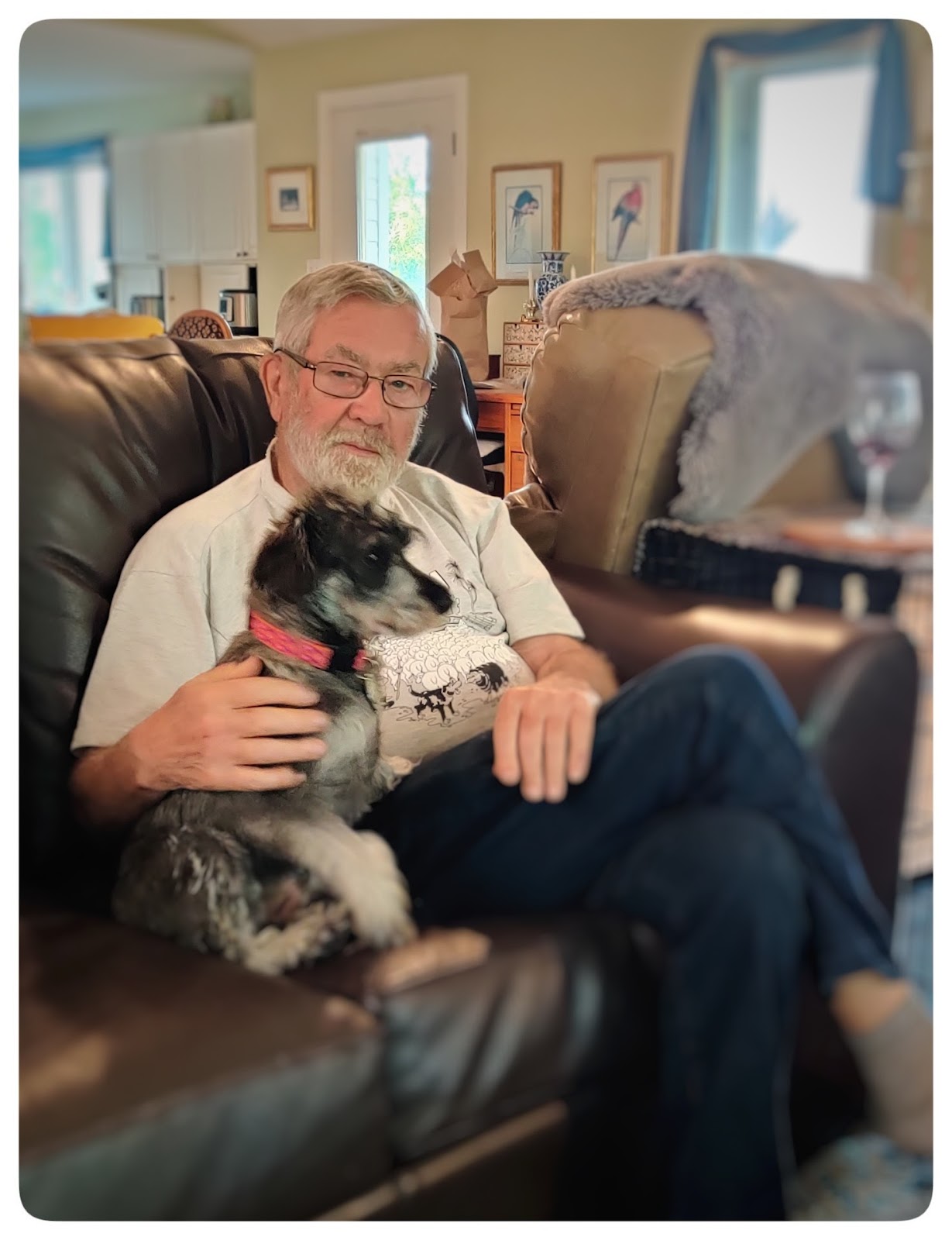 We’ve been in the pool multiple times since Carm opened it but alas, the weather has turned to cooler days and cold nights so our pool days are over for a few days. I can get into the icy water when it’s hot out, but am not as inclined to freeze on a cold day 😱

Monday, after Carm’s golf game, we went shopping for plants. I don’t have a clear idea of what I need for pots so just picked up a few flowery things. Thai basil and Italian parsley were nowhere to be found. We’ll have to continue the quest as those are the two plants that are must haves. I got so much pleasure harvesting herbs and the Thai basil has the added bonus of beautiful purple flowers.

It looks like our favorite apple tree has ½ died…

“the riot of colours in the greenhouses”

“a glimpse of baby robins in their nest”

“the awesome flight of swallows”

“Oh, what a beautiful mornin'

Oh, what a beautiful day

I've got a beautiful feelin'

I needn't say more. The sun is shining and it’s near summertime temps at 10am this morning. Glorious!

We’ve had one outing with both dogs which was a sh?& show at first. Eventually Adia settled down so they were easier to manage. Another time I had Lupa at the Foodland parking lot which went well (after a while). I think I need a better plan on how to teach her not to pull. I go between methods which may or may not help. At the beginning she’s usually too high threshold to take treats, but maybe if I brought the best ones out with me.

Friday we had lunch at Trudie & Leo’s, with Lupa in tow. Since we were outside she had to be on a leash but she was great and kept herself occupied for the whole 3 hours. At Mom & Dad’s yesterday she also tricked people into thinking that she’s a good dog, but little do they know! 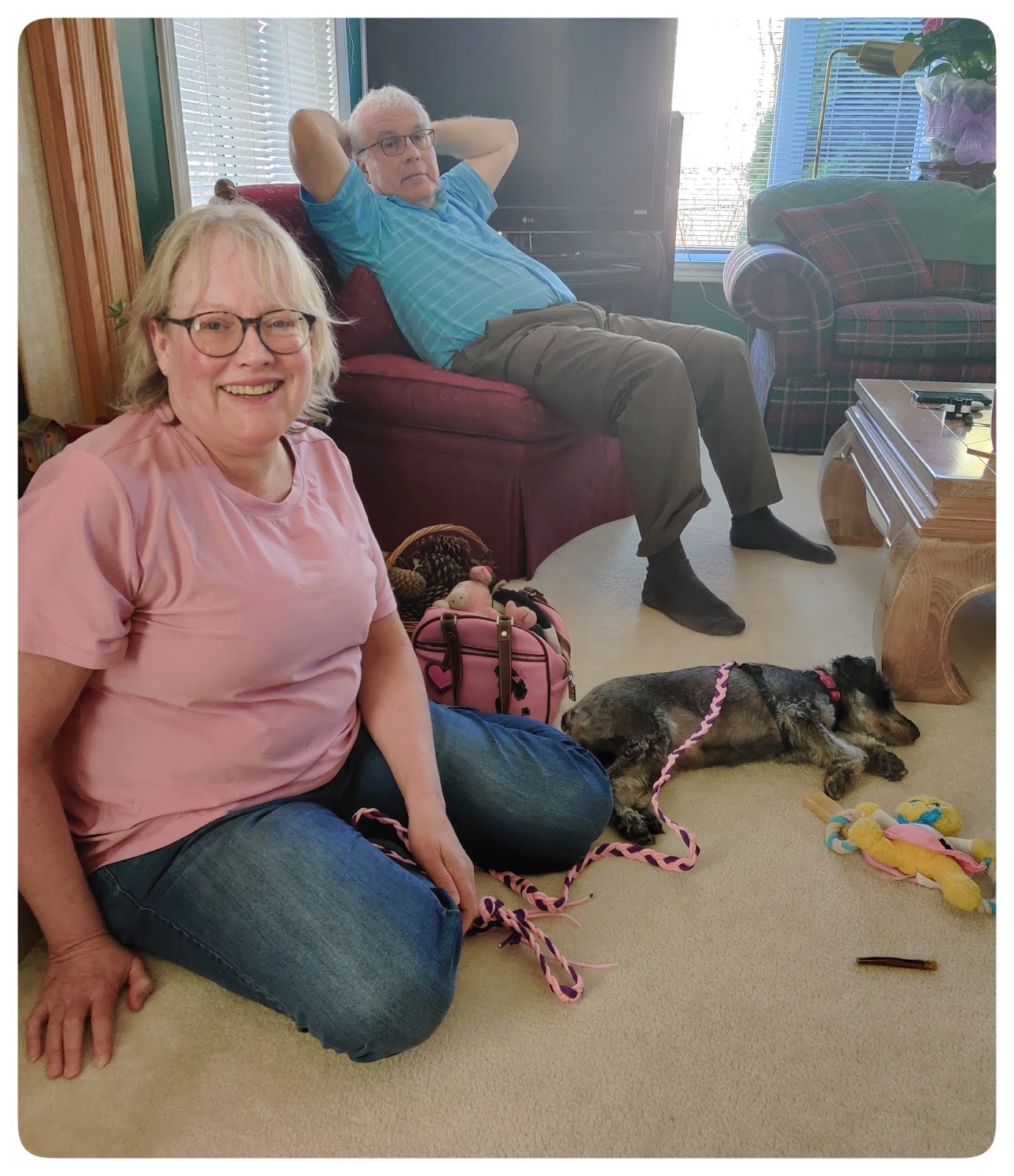 And that, my friends, was on Monday… a full 5 days ago! A glum anxious mood obliterated all thought and feelings, other than the glum inability to do anything other than stare into space while nibbling emergency meds. During these times I’ve learned to not fight my inertia as it doesn’t help and only brings more feelings of worthlessness when my drug bathed body fails to perform.

Reading helped yesterday. I started a book that I’d bought ages and ages ago - way before Lupa - that was about a miniature schnauzer named Atticus who is not at all like Lupa.

There’ve been no more doggie outings as the sun is blazing full force the last several days. It’s 32C today! Carm opened the pool on Tuesday (after a full game of golf) and his timing couldn’t have been better. We jumped into the polar waters on Thursday, a record setting splash. It was a chilly 19C. This morning it was 22C when I went for the first time. Nice. All this nice weather is not going to last but gosh it’s good while it’s here! 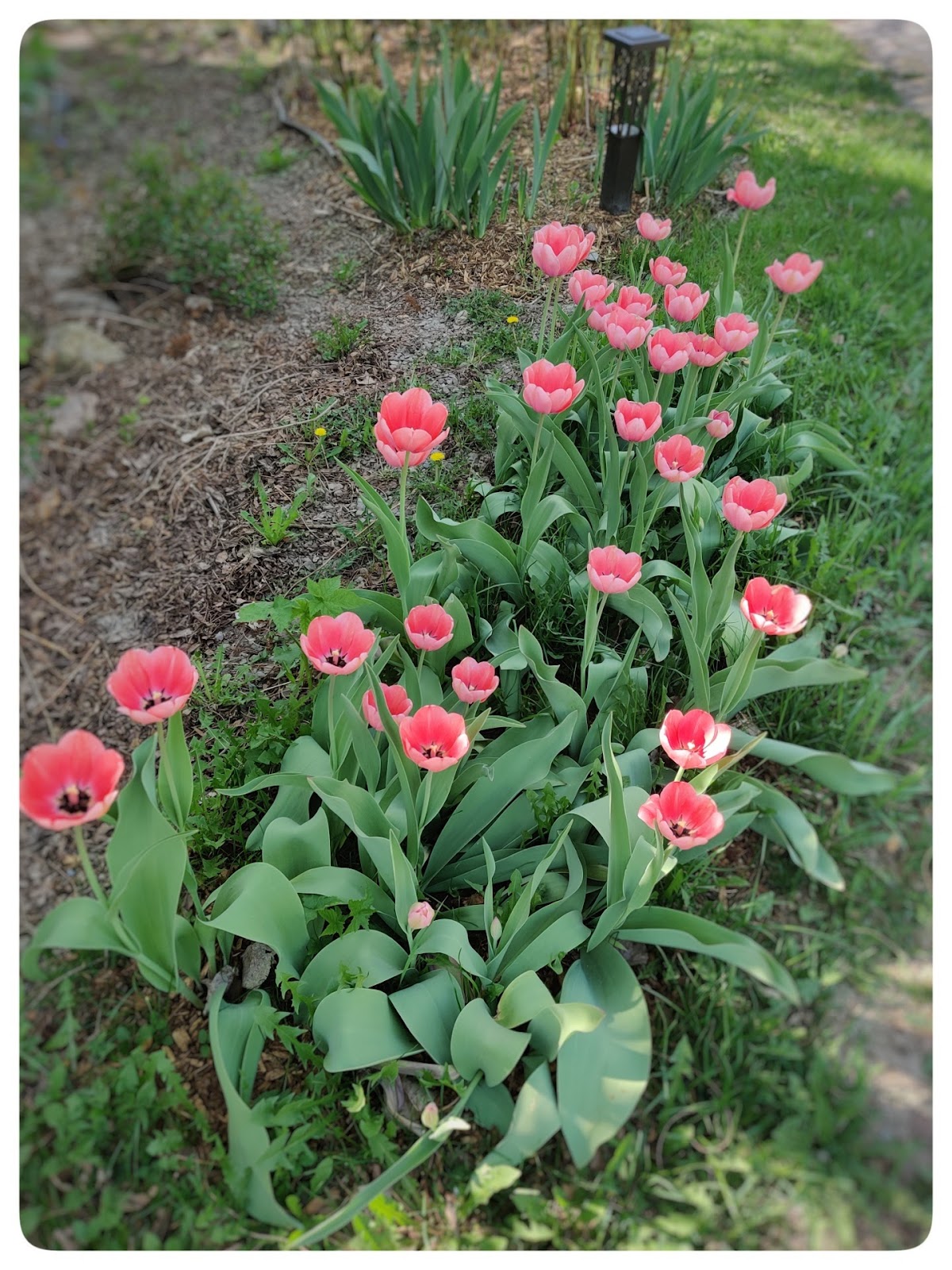 I’ve had some manic bursts this spring which is not unusual - last year my project was sewing webbing leashes, collars, belts, etc… - this year my material of choice is paracord. I’ve already made a nice grey leash (you’ve seen photos), so last week I braided 3 multi coloured leashes to go with their new collars. Obsessive? Yes.

“the perfection of the morning”

“the blue sky on a sunny day”

“the moment of peace”