WYL #22a Highs and Lows Continuation of building our house

The shaking earth jarred me out of my reverie. Tears welled in my eyes as I watched the first swath of earth being gouged by the shovel’s bucket to reveal where the long envisioned foundation would sit.

The hours wore on, until mid-day when quiet replaced the rumble of the machine and a large flat hole lay where a small hill had once been. As if on cue, a few pickup trucks followed by a large truck full of boards turned into the field and drove down to the gaping hole. Several men jumped out and with stakes and lengths of string mapped out the edges of where the footings would go. The hot day wore on and soon the sweaty men stripped down to jeans, their shirts tossed aside in a pile. I sat to the side and watched, my own Chippendale's show, as the strings were fortified with lumber.

As Nick watched, he checked his watch often. Closing time for the cement plant was quickly nearing and he wanted to get the footing filled before the weekend. The workers hurried. By late afternoon a channel defined the outline of our home. At exactly the right moment a cement mixer, with its rolling belly, turned into the yard and edged its way to the brink of the hole, releasing grey slurry down a track and into the channel. More trucks followed until the space defined by the boards was brimming with cement. Day one was complete and we were on our way to a new house. 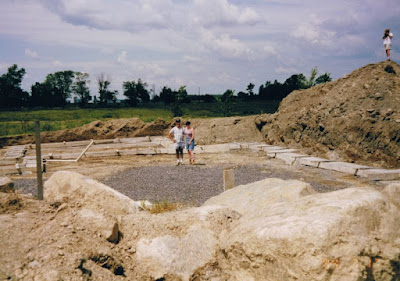 Every day for the next 9 weeks we stopped at the house to see its progress. From the footings to a foundation to a floor, walls and then a roof, the house was taking shape. When the outside was sheathed and the windows and doors were in, it was time for an important step: insulation and vapour barrier. Since we wanted an R2000 home, every tiny gap to the outside had to be sealed, and Nick made sure they were - there would be a penalty if the house failed to pass the test. 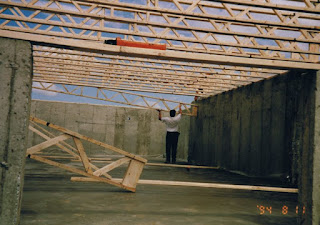 Unlike most home construction, all the framing was not done at the same time. The interior walls were left until after the vapour barrier was fully in place. This meant that the interior of the house was fully sealed from any cold drafts. Once the walls were raised we saw the bones of the rooms; until then we weren't sure if the plan that had been so carefully laid out on the computer would work out in real life. Electrical and plumbing were installed, drywall went up, hardwood floor and tile was installed, doors and trim were completed, and then finally, it was painted.

My mom, and Brian, a friend, helped with some of the small stuff, including the 10 parrots, 3 dogs and 2 cats, while a moving company wrestled with everything else. It was a long day but finally all our stuff was inside our new home. We said farewell to our helpers, and then, even though we were exhausted, got to work on placing some of the furniture and setting up the waterbed. It took a few days for everything to find a place. We loved the space and light of our new home. Speaking of space, the first few purchases were: cordless phones (we had to run from the sofa to get to the phone in the kitchen and sometimes missed calls); and a 4' wide mop for our ginormous room. We had a small dust mop, but it was a joke.

Nothing had been done outside the house except laying the gravel laneway. No grass covered the heavy clay mud that surrounded us. We nearly went out of our minds with 3 dogs going in and out of the house, but there was nothing we could do as it was already late September. Thankfully the hay field that skirted the brown mire spread its seeds and by the end of the following spring we could walk without getting 5lbs of muck on our boots.

Designing and then building a house was an amazing undertaking. Seeing some lines on a computer screen morph into a house was an experience like no other. I suppose in a tiny way it was like giving birth (without all the pain) as Carm and my ideas melded into a plan which grew into a solid structure. We felt very lucky to have this wonderful opportunity. 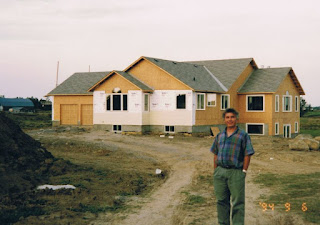