And So it Began

You might wonder how a person goes from a seemingly normal life to one suddenly beset by mental illness. For some people it happens more or less suddenly as might be the case with depression.  For me though there was a gradual transition. From the time I was a teen I struggled with periods of depression, not the kind that stops you in your tracks, but the kind that makes life difficult. My energy would be low, sometimes even walking seemed an effort. I wouldn't be able to muster up any enthusiasm, life would seem bleak. Unless you knew me very well you might not even know there was something wrong - depressed people are usually pretty good at putting on a party face.

Contrasting the down periods there were times when I had lots of energy and enthusiasm. In those times new projects would be started - lets look for land and have a house built, no blueprints for what we want then lets design our own house. Build a barn? No problem. How about adding a few more horses to the herd? Should we get another pair of parrots? Maybe we should redo all the fencing and put up some more. Looking back now I can't believe the things we got done in those hypo-manic times!

Thankfully the majority of time I was just regular old me.

Then one year the depression didn't end... it stayed and stayed... and got worse and worse... I tried an antidepressant and it worked for a while, but that summer I was really hypo-manic - among other things I bought three more horses, and bred four mares - what was I thinking? After my return to work from summer vacation things went south again. I couldn't think, everything was a muddle. I felt awful, I didn't really want to live. A trip to my GP brought another round of anti-depressants. They weren't helping so he helped me to find a psychiatrist. As soon as Dr. Beck saw me he diagnosed me as bipolar II and got me started on new medications.

I was dumbfounded - what would it mean to be bipolar? Depression was one thing, I always imagined that once it was cured it would be gone, probably forever, but bipolar... that was for life. I couldn't get my mind around it, I was freaked out. How would this change my life? Would I be changed? Would "me" be gone? Going on the internet was not much help. Everything I read seemed to suggest that my life would be miserable from now on. I found some online support groups and they were even worse. There seemed to be only people in dire straits - would I be one of them? They all seemed to be in such an awful state, some losing their homes, their spouses, their jobs. It was scary.

As the first year wore on and with lots of help from my doctor I started recovering from the depression. It was slow and there were many times that I cried in my room at the futility. One thing they don't tell you about depression is how much it can affect your brain, your thinking, your cognition. Some of the problem may be side effects from the medications. But thinking was hard. Simple tasks were difficult, finding words was often impossible. I think this was one of the things I had the most trouble with - I was used to being (a bit) cerebral! Now I was dull. I wondered if I'd ever be "me" again. I railed against the unfairness. It took a long time, but I did eventually get back my brain. If someone you know is struggling with this let them know that recovery will come!

With the depression gone I now found myself dealing with more intense hypo-mania. Sometimes I would sleep only an hour or two a night. My mind and thoughts would race through my head. Sometimes I'd get a lot done, but other times I'd just be a bit too much out of control and just spin my wheels rushing from one thing to the next. Concentration on one task was difficult and sometimes impossible. It was time for another medication adjustment. With that and some lifestyle changes (I'll talk about that in another post) I was pretty good, but had "break through" symptoms. However, when we retired and the stress of work was gone things got even better. (I didn’t quit work because of my illness though)

If you have been reading my blog for a while you know that I did get better and that with medications and a good doctor am living a normal/good life. I didn't lose my home, my spouse or my job. If anything I feel better than I ever have (with the exception of the odd little blip here and there).

There is always hope. 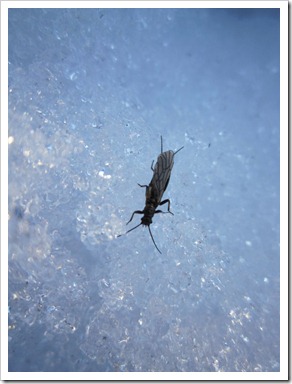 Since we were in town this afternoon we treated ourselves to some Pho. It was delicious!

And when we got home we found some insects crawling around on the snow. Spring really is coming!

Be miserable. Or motivate yourself. Whatever has to be done, it's always
your choice.
Wayne Dyer

Email ThisBlogThis!Share to TwitterShare to FacebookShare to Pinterest
Labels: bipolar