I've not been feeling creative the last few days. I'm trying to get my story written for Thursday's class, but my head seems to be wrapped in cotton wool so I'm not getting very far. I have the basic story written, but it lacks emotion and interest.

I'll try to exercise the creativity muscle by writing from '642 tiny things to write about': "There is a note on the table, and lots of blood. What happened?"

"Carm reached into Grace's cage thinking that he'd bring her over to the window. Like a cobra striking its enemy she grabbed his hand with bone crushing strength, her sharp beak breaking the skin. He snatched his hand away and slammed the door in her face. Blood poured from the gash on his finger and seeped through the paper towel he had wrapped around the wounded flesh. He grabbed the nearest pen, dripping blood all over the paper as he quickly wrote 'gone to get bandages' on a scrap piece of paper." 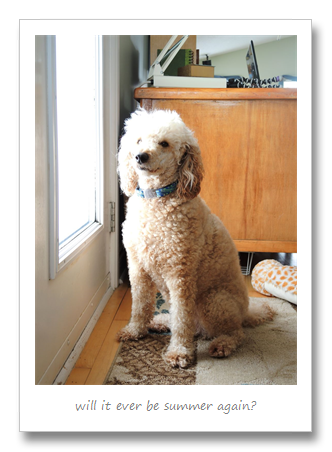 The weather is starting to warm up to bearable temperatures. It was the coldest February on record here, and I'm not surprised - there was week after week of temperatures below -20C overnight, often with wind chills in the -30s. Daytime temps weren't much better. There were several days that I was going to venture out for a snowshoe only to check the thermometer and see the snow skating across the open fields. No thanks.

I had been thinking about an high school friend that I'd long lost touch with as I was writing the last WYL topic and out of the blue a letter from her showed up. We've exchanged a few emails, and although she lives in another city we will hopefully meet in person. It has been over 15 years since I last saw her and much has changed in both our lives. Have you ever reconnected with someone from your past?