It was a blustery day today, with the clouds racing the geese across the sky. Cold too, at just around freezing. So much for spring.

I spent a long time staring out the kitchen window at all the birds going about their business. The heron was fishing in the pond, geese were floating in the creek and resting on the land (there were geese every which way), flocks and flocks of geese flew overhead, sideways in the wind. I saw robins, blackbirds, gulls and sparrows. Crows were seen in the flyways as well. So much life waiting for spring.

I think I mentioned that I started another blog - well, it is a bit hard to split my time between the two, I'll just have to practice. For now I'm in an obsessive mood about losing weight and my diet, so I guess the other blog will take up more of my time, and leave me with less other stuff to say.  Today's blog entry.

We shopped at both Costco and T&T yesterday - my fridge is STUFFED with produce. I actually keep a list of what I have in a file on my tablet. Otherwise I'll forget what we have until someday when I find something unidentifiable at the back of the fridge. (note to self: remember parsley in tomorrows smoothie).

There was an article on the news tonight about the 40th anniversary of the cell phone. I remember when my parents had a 'brick' about 30 years ago - they were pretty avante garde! The phone was huge, but we were all so amazed - I remember commenting about Maxwell Smart and his shoe phone (remember that?). One girl they interviewed wondered why they would make something so big -huh? Because the technology wasn't there yet? Ah, youth! 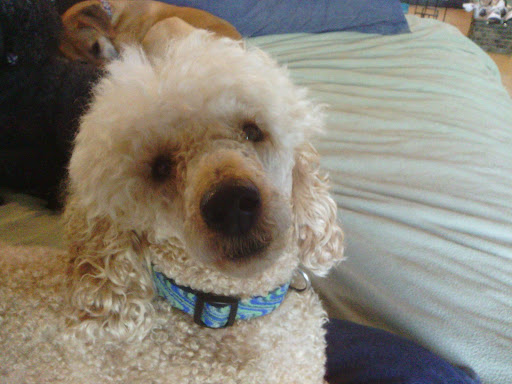 Spike's eye looks even better today. He is still so trusting.

Come Fairies, take me out of this dull world, for I would ride with you upon the wind and dance upon the mountains like a flame!
William Butler Yeats
Posted by Laura