The great affair is to move 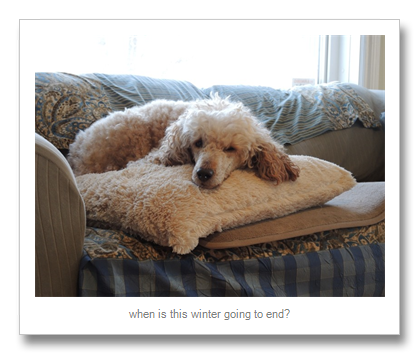 I couldn't stand it anymore - I had to get out of the house for a while. It was too cold to snowshoe (-36 with the wind-chill), and the sun was shining strongly. A drive seemed in order, even though the roads were sure to be icy with blowing snow. I just had to get OUT!!!

We decided on a world tour with our first stop being Sumatra. Home Outfitters had a sale on Starbucks coffee, plus we picked up a few other odds and ends. Next was Costco – the great old US of A. While there we took a short jaunt down to South America to pick up some produce.

It was a wild ride down the 417 to get to our Canadian stop - Lee Valley Tools. In anticipation of spring creepy crawlies we picked up a tick remover... ewwwww… let’s not forget the good things about winter! I love Lee Valley but was disciplined today and kept to the shopping list.

Sweden was our next destination: a Swedish lunch at IKEA fortified us for the rest of our journey. We picked up a few small things, and I did have a new toy for Spike in my cart, but without a family card it was double the price – fling, it was gone.

Our last flight was over the North Pole to China and Asia. I love shopping at T&T as there is so much to look at. Unfortunately the trip is often marred by a ridiculously slow check-out process. I swear the cashiers seem to move backwards. We stocked up on noodles and soup mix so won't have to go again for a while, although they do have the best Thai basil and bean sprouts.

Even though the temp on the thermometer was in the low teens, the car was toasty warm with strong rays of sun beaming into the windows - a frozen solid bottle of water even started to thaw. It is difficult to believe, but we could be less than a month away from above freezing temps. 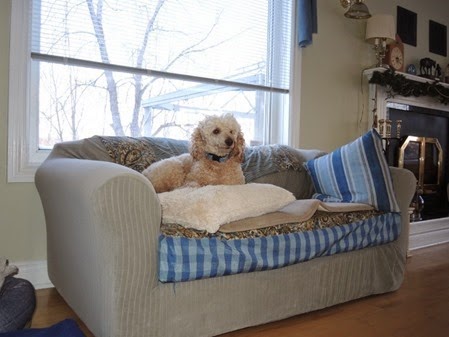 In the last week or two Spike has started growling, talking and barking while lying on a cushion on the little loveseat over by the window. We can't figure out what he is making a fuss about: he's not looking out the window; the other dogs are no where near him; there are no bones laying around; it is not supper time. It is very strange - I wonder if he is thinking about something very important; maybe he’s telling us he’s bored with this long winter and wants to go camping; or maybe he’s just seeing ghosts?

I travel not to go anywhere, but to go. I travel for travel's sake. The great affair is to move. ~Robert Louis Stevenson,