I tried something different for this writing group story. I thought that writing in 3rd person would let me show you the story, rather than just telling it. I wanted to give the feeling of looking on and seeing the action. I hope it works for you.

I did use a liberal amount of artistic license. The basic events of the story are true, but I embellished some of the background just a bit. I was trying to convey the feeling instead of it being a factual bullet point telling.

I wasn’t sure I’d get through the reading of this at yesterday’s writing group without bursting into tears. Writing it, and even doing the 2nd and 3rd edits had tears pressed to the backs of my eyes, but you’ll see for yourself the joy and trauma that causes such an emotional response in me. For the record, I got through the story without needing a tissue.

The little girl skipped around the back yard singing "I'm four, I'm four". Her blue chequered dress twirled as Laura spun in a circle. Every now and then she could see her mom's head peeking through the window to make she was still in the yard. Laura was hoping her mom was making a birthday cake for her, something piled high with puffy white icing and not coconut like last year.

The leaves on the trees that lined the yard were starting to turn a bright yellow, a sure sign that September was well underway, but the grass was still green and soft, a welcoming carpet for Laura to flop down on. The grass tickled the back of her legs so she jumped up to run some more, pretending she was riding the horse at the zoo. A voice called to her from the front yard.

"Daddy!". She ran to the front of the house and skidded to a stop when she saw he had a small wicker tackle box in his hands. Her mom was standing beside him with a wide smile on her face. He crouched down and carefully set the basket on the grass.

Laura walked over and knelt on the grass beside the tackle box. It started to move a bit and then a small white paw darted out of the hole in the top of the basket. The little girl's eyes widened in excitement as she fumbled with the latch. When she flipped the lid open there was a small orange and white kitten blinking up at her. She looked to her mother and then her father, both smiling and nodding their heads at her.

"Go ahead, it's yours." her mother gently affirmed. Laura carefully lifted the kitten out and cuddled it in her arms.

"Well, what should we call her?" her dad asked with a chuckle.

"Puff. Puff is the perfect name for her." Laura said with a large grin, her eyes sparkling with delight.

Laura loved the fluffy little kitten that grew into a beautiful cat. As the years passed Puff was a loyal companion. Being dressed in dolls clothes was not her favourite pastime, and the bonnets were the worst, but Puff cooperated, at least until she could sneak away. Curled up in the crook of Laura's legs at night she would scare away monsters and protect her from demons. Puff was an avid hunter and would often bring her catches home to drop them at Laura's feet. Injured birds with no hope of survival gave Laura the first lessons on life and death and taught her that life is fragile.

Sometimes Laura would put a harness and leash on the cat so that Puff could track down wounded birds in the overgrowth close to their home. Laura would try to nurse the birds back to health, but rarely succeeded. She loved all animals and tried to fill her life with them, even if it meant sick birds, fish caught in the creek, or frogs from the local pond.

Eight years later it was over in a split-second. Running across the street to see Laura off to school Puff didn't see the speeding car until it was too late. She died instantly while Laura looked on from the sidewalk at the front of the house. She started running towards the road, towards Puff, who was lying lifeless on the pavement, but the neighbour ran over and grabbed her, sparing Laura the image of the blood and gore of the critically injured animal.

For the next few months, alone in her bedroom, Laura could sometimes hear and often felt Puff still curled up in the crook of her legs. She'd open her eyes, hoping that the accident had just been a nightmare, but when she saw it was not so she closed her eyes again, a damp tissue grasped in her hand.

It seemed that the tears would never stop but they did. However, for the rest of her life Laura couldn't listen to  Peter, Paul and Mary's 'Puff the Magic Dragon' without glistening eyes and a choking feeling in her chest.
The simple birthday present of the kitten was a wonderful gift of love and joy, and yes, sadness. 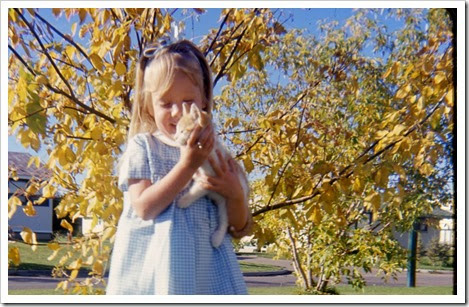