The alarm was set this morning - writing group day! I was out of the house with the dogs while there was still a bit of pink on the sky. Everything was covered with the fluffy white snow that had fallen overnight so I got busy un-puffing the truck while the dogs went about their doggie business (no rabbits surprised). The brief taste of winter air was like a shot of espresso - I felt alert and alive.

This week's topic was ages 6 to 12 - my story is a 'this and then that' recounting of events recalled from all those years ago. 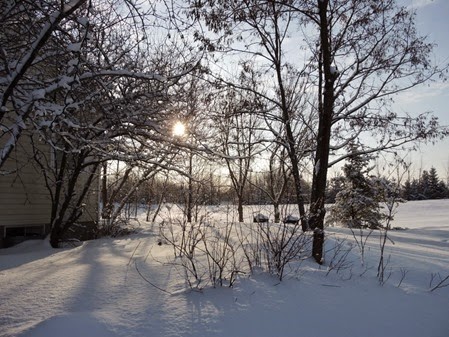 "To Laura, for her cheerfulness and kindness to others." was inscribed by Mrs. Bott on the first page of my grade 1 book. My mom says I born with a sunny disposition. Through many years, difficulties and even a diagnosis of bipolar disorder this cheerfulness has been part of me, smoothing the path.

Moving into the air force base in Rivers, Manitoba just before grade 1 gave me a freedom that six and seven year olds rarely get to experience nowadays. It had a rural feeling that I naturally enjoyed. My dim memories include a swimming pool not far way (where I learned to swim), a baseball diamond with dugouts the other direction (where I was flashed by a partially naked man), the long straight road to school (where a man tried to lure me into his car), and grassy fields everywhere I looked.

There were no homes behind ours, just crab-apple trees that my mom made jam from, and then a tall fence separating us from a jump tower and a distant slice of runway. Jets and other planes took off behind the house thrilling me with the sound. We took off on that runway too - my dad was behind the wheel of PJZ, our little red Piper Tripacer airplane. Taking to the air was a thrill... that is until I puked, which I often did. I think the smell of oil and gas triggered the honking that earned me the nickname goose.

I got a shiny blue bike for my 7th birthday that fired my imagination and put hooves on my feet. It was more than a hunk of metal with some rubber - it was my horse.

For the base parade my mom, Mrs. McLennon and I spent hours making pink tissue flowers to decorate my bike and clothes with. The pink powder puff vision won me 1st prize for bike decoration, my first time at winning something.

My friend Kathy and I could bike to the nearby village to visit the corner store. We would grasp onto our nickel tightly as we gaped at the racks of candy along one wall. I would carefully make my choices before handing the sweaty nickel to the shop keeper. The brown bag crinkled as I tightly rolled the top closed, after, of course, picking a favourite treat to pop into my mouth. Usually there were licorice babies, and often a jaw breaker or two included in my score of sugar. We'd get on our bikes and pedal our way back to the base, the dust rising into the hot summer air.

We moved to Portage La Prairie, Manitoba in time for grade 3. I could be out of the base and into the country in just a short gallop on my trusty bike. On a sunny summer day the dusty rural roads lured me away from civilization. The aromas of clover, vetch and freshly cut hay scented the air while I waded in Devil's creek trying to catch all manner of tadpoles, frogs and fish to bring home to my small aquarium.

I remember seeing two horse back riders just down the street from our house. This captured my fancy and I dreamt of the day when I could ride my own horse around the countryside.

We lived in two houses during our 2 year stay in Portage. Our second house was next door to the Scanlons and as it turned out, my first crush. Danny was a year older than me and I swooned at his tall, dark good looks - for years! He rarely returned my attention, but one time we planned our future together - we'd both be vets and live in the country (we were watching one of the Planet of the Apes at the time). His family moved to Winnipeg when I was in grade 6, but then our family moved away just before I entered grade 9. He got married when I was in my early 20s, ending my secret fantasy.

I used to set up the tent in the backyard and spent many summer nights staring at the stars, the smell of musty canvas filling my lungs.

I loved animals and wanted a dog till it hurt. I lured a stray home when I was 9 which we named Shep. He was a rough looking dog with a sharp needle like coat that stuck in the carpet and pricked our feet. He was blind in one eye and chased every car despite all training efforts. For a myriad of reasons my mom gave him away. After Shep left I was on the lookout for dogs I could walk. When the people moved into the house behind us with a St. Bernard I was ecstatic. Heidi was at least twice my weight, but was as gentle as a lamb. Somehow, I was able to convince the owners to let me take Heidi for walks.  She was very good, except for the time she saw my cat and chased her through the side of the tent - there were now two doors!

I was 10 when we moved to Winnipeg, Manitoba - grade 5. The school was 1/2 mile away and we walked no matter what the weather. In the winter we'd wrap scarves over our faces so that only our eyes peered out. My glasses would fog up so that I could barely see where I was going.

Our house in Winnipeg backed onto an undeveloped area that gave me and my iron pony plenty of room to roam. We'd race along the twisting path that skirted the creek, ducking branches and bouncing over gnarled roots. There was an old house nestled in the weeds of the vacant land behind our house with a mysterious,and to us kids, dangerous, occupant. I never took the dare to run up to the door. It was torn down to be replaced with a curling rink.

Behind the garage was a forgotten pile of old boards that I fashioned into a fort. Gravity, along with bits of rope and wire, held the grungy structure together. I'd sit in there getting covered in dirt and trying not to notice the spiders, thinking about the house in the country that I'd someday have, and the horses and dogs that would share it with me.

When I was in the middle of grade 6 we picked up roots again, this time for 6 months in Farnbourgh, England. But that's another story.