WYL #6 Special Moments in my Childhood

Some of the memories in this story are as clear as a bell, while others are like ghosts moving through a fairy-tale landscape. Much like watching TV without an antenna, the program is just barely visible through the static. If  I fiddle with the dial enough a moment of clarity is achieved.

The seat-belt was strapped tightly across my hips, pinning me to the seat.  I sank back into the cushion behind me, closing my eyes in an effort to contain my excitement, but it was no use, I wanted to jump out of my seat and run up and down the aisle shouting, but the seat-belt kept me firmly in place. 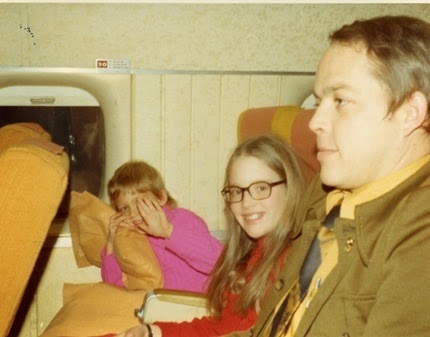 "Christmas in Norway, Christmas in Norway!". The words rang like church bells in my head as I tried to make myself fall asleep. The blackness outside the oval window reminded me that morning and a fantastic adventure would soon be upon us - the most exciting in my 11 years.

We had to change planes in Heathrow, England and as we made our approach I looked out the window wondering if I could see the house we'd be living in for 6 months. The two excitements merged together for a moment and threatened to overwhelm me.

I don't remember landing in Oslo, perhaps by then the excitement had obliterated my mind, but I do recall sitting in cousin Harry's car and driving down snow covered roads to his house. It was 1973, during the oil embargo, and vehicle travel was strictly controlled. Harry had gotten a special permit allowing him to drive us down the all but abandoned roads. We arrived at his house outside Oslo totally exhausted from our trip. After a long nap, it was time for supper - thick sausages and all manner of pickles and cheeses settled into my tired tummy.

We spent a few nights at Harry's, sleeping in comfortable built-in bunk-beds with thick, warm duvets. In the morning Harry's wife would bring plates of sweets and steaming mugs hot chocolate to our room - I was pretty sure that Norway was synonymous with heaven. 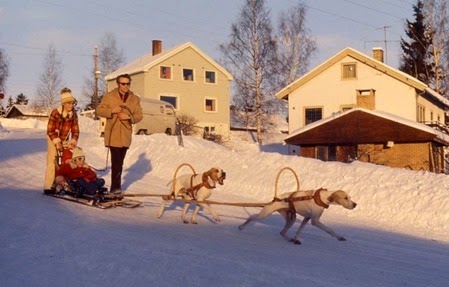 One night Harry transported us by sled, pulled by his two pointer dogs, to the local community centre where we watched cartoons. Indelibly written in my memory is a fleeting moment in the sleigh: the sky was black except for the slight haze of wood smoke in the air and echoed with the crunch of the sled runners on the packed snow. To this very day, the smell of wood smoke on cold, crisp air transports me back to that moment. 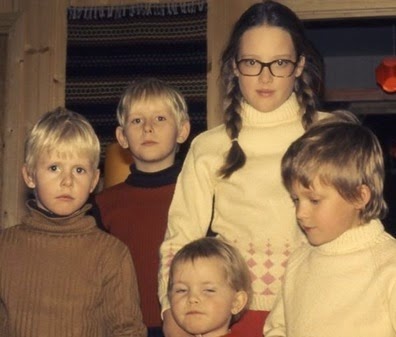 My sister Kirsten and I had cousins our age at Harry's - Tom-Arthur, Espen and Nina-Kari spoke only a smattering of English, and we spoke zero Norwegian, but somehow we managed to communicate.

Eventually it was time to leave Harry's and travel further north to Otta. I don't recall who drove us, but my eyes were wide with the sights of Norway. Tall, snow covered spruce trees lined the road as the expedition took us further towards our fairy tale Christmas. Mountain waterfalls frozen immobile, and rocks shaped like trolls teased my childish imagination.

We arrived at Ragna's house just outside Otta while there was still a bit of light in the sky. They were wonderful hosts, fattening us up with all manner of Norwegian cookies. At supper there was reindeer meat, pork, potatoes.

During the days leading up to Christmas, we visited countless cousins who each welcomed us with mountains of cookies and cakes. My eyes grew wide with each towering peak of treats. Another special visit was to Skjenna Farm, our paternal grandfather's ancestral home. 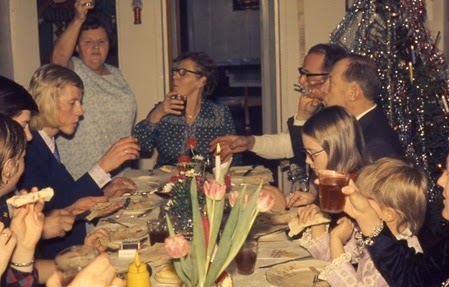 Christmas Eve finally arrived. Extra tables were brought out and the table set. A Christmas tree mysteriously arrived at the front door and we decorated it with pretty balls and strings of tinsel. Plates piled high with lutefisk, lefse, boiled potatoes, cheeses, reindeer meat, cold cuts, and more that I can't remember, were crammed onto the waiting tables.

We were still stuffing ourselves when there was a knock at the door. The children were sent to answer it, and there in front of our eyes was Yulenissen, Santa Claus, with a sleigh full of presents. Behind him shone a special Norwegian sled - one with metal runners under a chair called a Spark. It was for my sister Kirsten and I! We couldn't believe that we'd been so lucky. 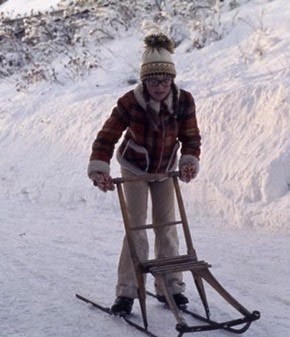 First thing the next morning car loads of people, sleds and toboggans drove up the mountain. Everyone got on their sled and with a WHEEE started the descent. I was sitting on our new sleigh with my dad balanced on the runners behind me. Sparks flew as we hit small stones, and it seemed that we might reach the speed of light. When we skidded to a stop at the bottom of the mountain my heart was beating as hard as if I had run down.

There were more days of visiting in Otta, a few more days spent in Oslo with Harry and his family (Tom-Arthur gave me a ceramic thing that he made... and the mumps) and then we started driving towards Farnborough, England, our next destination.