It was my friend Christina’s birthday party today and what a party it was. She and her husband are dairy farmers and since many of their friends and relatives are also farmers she had her party in the middle of the day on a Sunday so that everyone could attend. There were at least 70 people of all ages, many of them immigrants from Switzerland.

I met Christina many years ago when I had Dora boarded at Twin Pines. Christina took lessons there and since I didn’t ride Dora as often as I should I asked Christina to ride her as well. After Dora came home to live we kept in touch but didn’t get to see each other very often – our schedules just didn’t mesh. However, when I got sick and was home for 6 months she came and visited with me once a week. It was exactly the kind of social contact that I needed (thanks Christina). After that we have managed to keep a somewhat regular schedule of coffee’s. Sure life interferes quite often but we still keep in touch, even if it is just email during the busy times. And hopefully she knows that I’ll always lend an ear ;-)

Hans had cleaned out the machine shed (hardly a shed, more like a mansion) to make room for plenty of tables and chairs. They had decorated nicely with a fall theme.

At 1pm the centerpiece of lunch arrived – a roasted pig. Oh my what a tasty beast it was – I don’t think I’ve ever had such tender meat. There were tons of salads and sides, not to mention desserts – all of Christina’s friends had contributed to the meal – yummy! 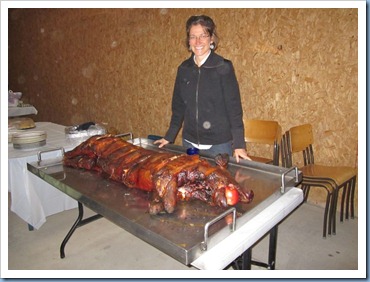 We had a lovely time, meeting new people and renewing acquaintances with others we had briefly met before. It was so interesting to talk to people with such a different background from us. We normally “hang around” with IT geeks, but today the company was mainly farmers (such a refreshing change!). In many ways it reminded me of branding gatherings that I attended as a child out west – I felt strangely at home.

The ladies all pitched in arranging food and dishes, cleaning up and washing the next round of dishes. Little girls with blonde hair and braids giggled in the kitchen with dish towels in their hands. Men stood in clusters, talking politics, crops and other such topics. Some of the talk was about how this current generation doesn’t appreciate what they have and want instant gratification. One older gentleman who had done a lot of hard work over the years (it showed in his work roughened hands) laughed when we asked if the younger generation knew the same hardships.

When we got home I took the dogs out to the field for a run. They went crazy running in circles. I will never tire of watching them run and have fun – the unbridled joy is infectious. 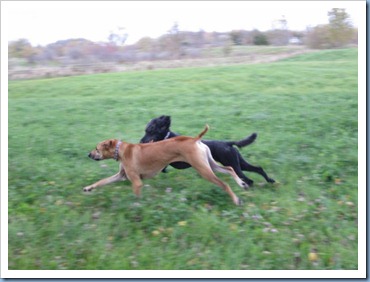 Email ThisBlogThis!Share to TwitterShare to FacebookShare to Pinterest
Labels: dogs