Honeycomb, Won’t You Be My Baby

I got it! The Asus Eee Transformer tablet which runs Honeycomb Android :-)  (see http://youtu.be/anRqh02N8UM for the honeycomb song – who knew it wasn’t just a cereal!).

We saw that they were for sale at Best Buy so headed into town on Sunday to check it out. Yes they had some in stock so yes, we want to buy one. Then we were lucky enough to find one in an open box for $100 less – yes that’s right one hundred dollars less! What good luck :-) The gadgeteer has her new gadget :-)

We got it home and set up to charge but it was too hard to keep my hands off it, so on it went (while it was charging). I got everything set up and a bunch of apps installed. I started with Google maps, Google navigation, and LCBO wine store locator, another LCBO app that tells you where bottles are in stock, a wine review app that reads the barcode (how neat is that!), an online editor for blogger, goggle star chart, oh and a few more odds and ends. I’m sure I’ll end up with more but this was a good start.

Now the bad news, when I set it up I did it using a new Gmail account which turns out to be unlinkable to my existing goggle account that has blogger, calendar, etc. The only solution – blow the machine away and start over… so that’s what I did when I got up this morning. Imagine if Windows worked that way… Now it’s set up with the right account and I’m good to go (think, hope, pray).

Google Maps Navigation has a GPS with turn by turn guidance and there’s some way that you can set it up so it’s stored offline on your SD card. I gave it a try but didn’t have any luck. It’s supposed to store the step by step route instructions with a voice, so that you can use it without an internet connection (the tablet only has Wi-Fi and not 3G or HSPA).  I could see the map and it did show us travelling as a little blue arrow (a bit like Harry Potter’s magic map). More testing required. 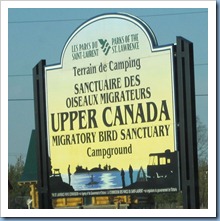 Our little test drive took us to the Upper Canada Bird Sanctuary about 45 minutes away. We travelled on the smallest back roads, ones that we’d never been on before. I could almost hear the banjos at some points as it seemed we had entered Hillbilly Land - there were “houses” so run down you couldn’t imagine anyone living there, and with yards so full of junk that I almost stopped to take a picture. These were BACK roads! 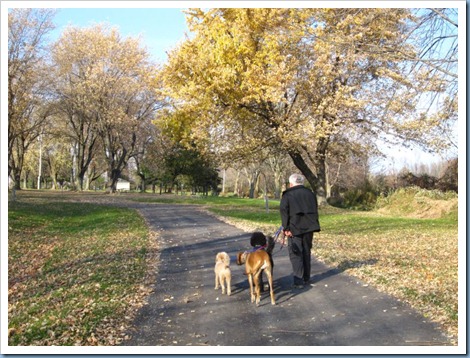 The Bird Sanctuary is a pretty little campground with some really lovely sites (47, 48, and 11 were the ones that caught our eye). It’s a booze free zone though so I guess we’d have to forgo the bubbles - or drink it in a coffee cup ;-) We were planning on going for a camp there this fall but the weather didn’t cooperate. In fact it was warmer today at 17C (61F) than it was the days we were going to go!

I’m off to play with software to try to integrate and automate my life  :-)