Our Visit to Upper Canada Village

After my Mom arrived at the campground Thursday morning we all bundled into her van to go to Upper Canada Village (after walking the dogs, setting the air conditioning, closing the blinds and putting the TV on loud).

Upper Canada Village is a gem situated along the St. Lawrence River. It is a collection of houses and businesses that have been collected and restored and set up to look like an authentic village from the 1800s. There is a saw mill, a flour mill, a shoemaker, a printer, a blacksmith, a woollen mill, a schoolhouse, a doctor’s house, a farmer’s house, a tenant farmer’s house, the farm hand’s house, to name but a few. And to bring everything to life there are re-enactors in each of the buildings to describe life as it was in those times. Dressed in period costume they really make the experience come alive, especially for the children.

As you come into the village there is an interpretive centre that describes life in those times, and also talks about the Battle of Chrysler Farm, fought on November 11, 1812. It is particularly interesting to us as our great great great (how many greats we couldn’t figure out) Grandmother hid in the basement of the farm and watched the battle. There was even a picture of her (Catherine Fetterly Harkness) in the display (why didn’t I take a photo of that?). 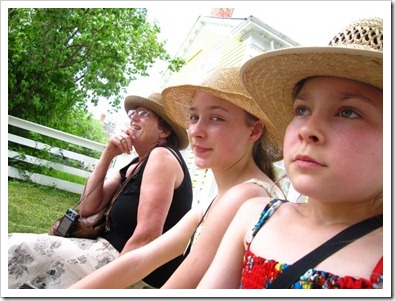 Shenna and Nissa were entranced. They loved the schoolhouse where the school mistress described what school was like. We practically had to drag Nissa from the building!

There were even wagons pulled by beautiful black Canadian Horses. I think the girls are missing their ponies from home. 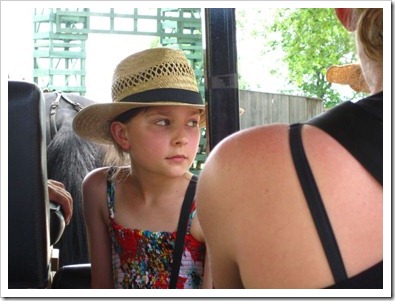 At the bakery we watched the bakers remove bread from the oven and pack it into baskets to go to the store. As the baskets were loaded into the wagon the girls were invited up.

Later we picked up a loaf of this very bread to have as our supper. And since we also visited the cheese factory it was only fitting that we have some cheese as well. 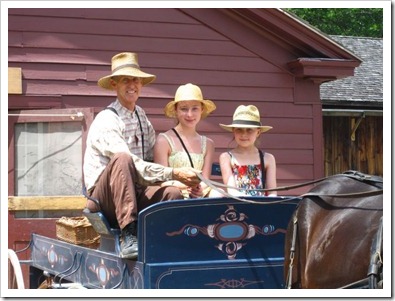 The village was very rural so there were a few farms. They had chickens, pigs (the piglets were running around all over – the girls even got to feed them), beef cows and calves, horses (and a foal), and of course dairy cows. We were each given a go to milk them. It gives a new appreciation for what goes into a glass of milk – or used to as now farms are very mechanized. The “farmer” said that each cow would take 10 minutes to milk – he had very  strong hands and wrists! 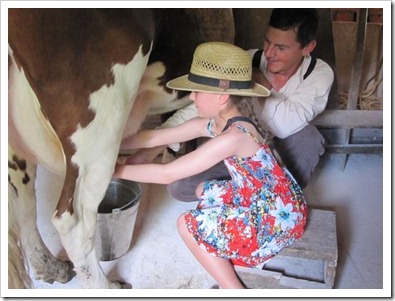 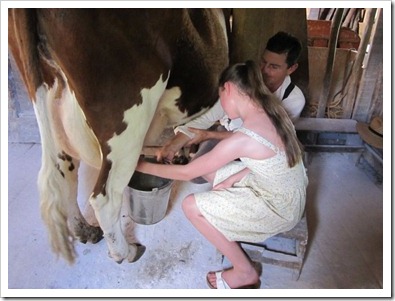 We were there for over 5 hours and still missed several buildings, didn’t take the barge ride, nor did we take the train. We were exhausted but satisfied.

When we got back to the camper I was sure to ask the neighbour if the dogs had been quiet – she said they didn’t make a peep – good dogs!