I was going to go through my calendar and try to figure out what we did each day when Kirsten was here. However, since I don't really remember the exact days we did things I thought instead I could capture the essence of what we did and how their visit was.

Here are some things we did, sort of in order, but not totally:

The next day was Canada Day, and I drove in to visit.

I think the next day (Monday) my brother Graham brought Kirsten and all the kids out for a swim. Kirsten & girls stayed over.

Wednesday we were camping. We did a bit of shopping in Morrisburg.

Thursday my mom came camping and we went to Upper Canada Village.

Friday they all left and Carm came to help me tear down and drive the camper back home.

Saturday & Sunday Kirsten and the girls were in Montreal with their aunt Kenda.

Monday... is that the day we went shopping with Mom for her dress? 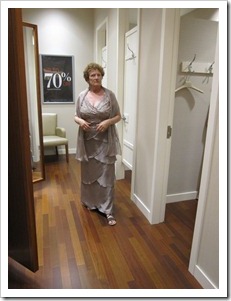 blur of shopping, visiting, swimming & sleepovers (Wed I didn't see them - dr. appointment). One of the nights they stayed over - I can't remember what we had for supper. We did go to St. Albert for curds and an icecream.

Friday we did something but I can't remember what. Maybe swimming? 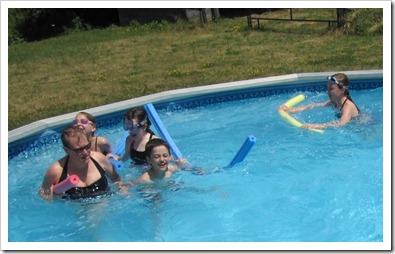 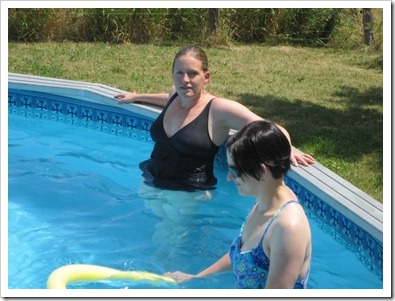 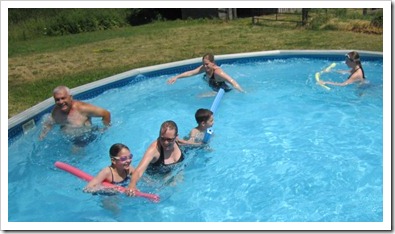 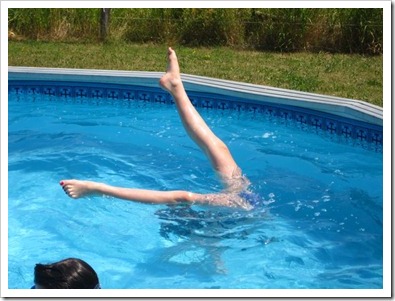 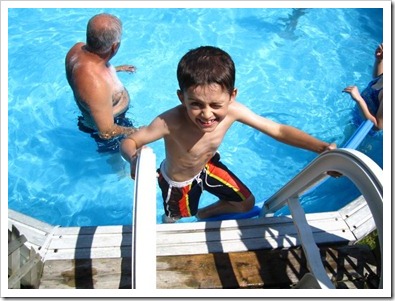 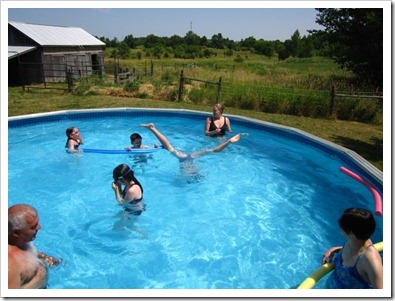 Sunday I went to Jade's shower (Carm's nephew's wife to be)

Monday Kirsten, Shenna and I went shopping for a dress for Shenna for the party. We found a pretty (demure) black lace one for $10.00 at one of the cheesy shops for young adults. Then Graham and Carole took us out for supper (delicious sushi!). Tuesday during the day the kids were over for more swimming. Kirsten must have brought them out for just a few hours. Juliette is so much more comfortable around the dogs. I think it is really great that she is overcoming her fears – you go girl! 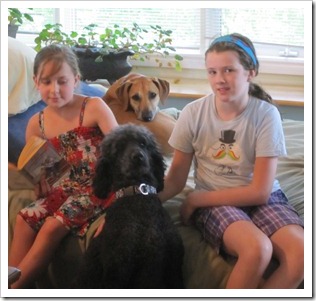 Tuesday evening I had dedicated time to do the music for the anniversary party - power outage from 3pm to 3am. Instead we went in for a visit - Uncle Graham and Aunt Barb had arrived from Medicine Hat, and the Foleys from Scotland. It was a full house!

Wednesday was the music day. Everyone else went to Mackenzie King's estate for tea, but I was stuck in front of my computer - ALL DAY and into the night. Who knew it would take so long...

Kirsten and the girls came out Wednesday evening for the night. We had a quick supper of gnocchi and then dashed over to the Dairy Queen before it got too late.  Everyone enjoyed their last taste of Dairy Queen (blizzards for Kirsten, Nissa and I, some kind of chocolate sauce icecream bowl for Shenna and a strawberry sundae for Carm.

Thursday we all (except Carm) headed back to town where we helped out and ran some errands.  I had an appointment at 4pm at Brittania Yaght club where the party was being held. Kirsten drove and I navigated... what can I say, between the traffic from rush hour and the bad directions we didn't make it there till 4:30. Luckily Brianna was still there... so we could find out that their cd player didn't work at all... and their ipod dock may or may not have an input. It certainly didn't have one that matched my mp3 player so off to Best Buy to see what we could find. Through the rush hour traffic we forged. Luckily they had the part so we rushed back to see if it worked. Hurrah! It did.

A few more errands and a stop to share a hamburger (the place was voted best hamburger in Ottawa, of course we had to try it - it was good). Finally we were home by almost 8pm. We were wiped, but I still had to finish up with the music. Mom had a few more songs she wanted to add, and then finally it was time to load  the music onto my mp3 player (Creative Labs Zen). When I first opened the Zen software it showed a list of music that was a fraction of the songs, then right before my eyes the number started going down. 31...30...29...28...27... At this point I'm hyperventilating and quickly checked the directory using Windows My Computer - all the songs were there. I figured it might have something to do with the number on songs in the directory so I quickly divided it up into 5 directories. Suddenly it all started working and I was able to load the music. Whew. It was past 9:30 and I was done for - I couldn't remember feeling that tired. I was glad I was staying the night and not driving home (plus it gave me a few more minutes with Kirsten!).

Friday was the big day - my parent's 50th Wedding Anniversary Party. Excitement was high as Mom, Jane Foley, and Shenna arranged the flowers. 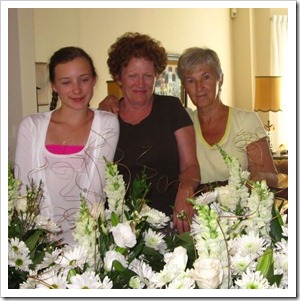 In the afternoon (Uncle) Graham and I ran over to DiRenzios to pick up an order of sandwiches that Carm had placed. More things to organize, showers to take, and dresses to arrange. Finally by 4:15 flowers, cake, dresses, etc. was loaded into the van and off Kirsten, Shenna and I went... through rush hour again. The Foleys went in their own “packed carefully with flowers” car. They took a different (better) route and got there way before us. We finally got there in one piece and got to work. Once we were done the place was transformed. It looked so pretty, I knew my Mom would love it. We got into our dresses and got the music playing with some romantic big band music just in time for the guests to start arriving. 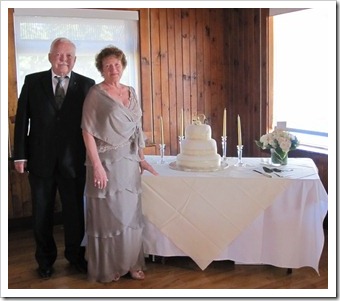 The night turned out perfectly. Except... hardly anyone danced... my music was a bust. Kirsten had to play the hip hop music on her phone so that at least the kids would have fun. The place didn't have any air-conditioning and it was hot which most certainly contributed to the lack of motion on the dance floor.

No rest for the weary though - Saturday Mom was hosting a get together for the out-of-town family. I knew that bbqing for 25 people would be a bit of a hassle so Carm and I made Pepproncini beef in the crockpot - with some pre-made salads, rolls, and the desserts that Carole had made we had an easy supper. And no one had to bake out by the bbq.

After everyone had left I followed Kirsten up to their room. She and the girls had to pack. With the scale out they made sure their bags were loaded within limits, and the items were evenly distributed. We joked that she'd have to pack the Frosted Wheat cereal that she got for Shawn in separate pieces - distributed in every nook and cranny. Luckily the box fit ;-)  After the packing was done the girls fell asleep and Kirsten and I talked into the night.

I've already talked about Sunday - the day they left. No need to rehash that misery!

I guess I ended up laying out much of what we did. Except that I missed what I really wanted to capture which was the essence of their visit. Suffice it to say we spent a lot of time together, but not enough. The girls are lovely, warm, funny, cute and it was just so wonderful to get to know them again. Shenna is reserved and a bit shy, but when she smiles it lights a room. Nissa is a clown and a bit of an actress. She is just a joy to be around. She's a bit of a nut! Kirsten is a bit zany, she likes to goof around and is very funny. She's a great mom. She's easy to talk to and fun to be around. We laughed at the same things. They are all a bit animal crazy like me (on their farm they have dogs, cats, budgie, ponies, sheep, chickens, ducks and who knows what else). Kirsten and I could talk and talk and it seemed that we never ran out of things to say.

They live too far away.

Finally, the essence of their visit can be boiled down into one word - LOVE.

I'm pleased to say that even with all the sleep disruption and excitement I managed the 3 weeks without slipping into hypo-mania. I'm glad we (doctor & I) bumped one of my meds back up a notch as I hardly experienced any anxiety. I felt good the whole time. Since they've left I've been catching up on my sleep (oh my gosh I was so tired by the end) and relaxing a bit. I am keeping myself busy enough to hopefully keep any depression away. We head out in just under 2 weeks for a trip to Presquille, and I'm planning a trip to NZ in late January so having those trips to look forward to is really helping.

Of course sitting here writing this brings back some damp eye, but that's okay - it just means I had a good time :-)