I was up at the crack of dawn this morning and after taking the dogs out for a few minutes I knew I couldn't return to bed. It was just that beautiful. Instead I grabbed a coffee and headed outside to the swing. It was so peaceful and still, there was a faint mist on the horizon (my favourite vista on our property), the birds were chirping and flitting around looking for their breakfasts, the breeze occasionally stirred the tallest trees, and thankfully there wasn't much traffic on the road. 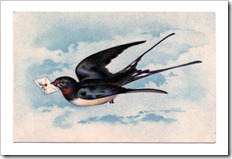 As I sat there enjoying the moment, the chatter of birds over by the barn caught my attention. Then I saw some swooping swallows. I realized that there were some newly fledged chicks learning to fly. The parents flew around them encouraging each one. It was amazing to watch them increase their prowess. At first each try was awkward with many stops, but soon they were taking slightly larger swoops away from the barn. They practiced for a while and then all at once plopped down on the barn to rest. A minute or two later they were up and away, this time with much more skill. The parents took them farther afield this time, such that I lost sight of them for a bit. Soon they were back for another short rest before trying again. It was obvious it wouldn't be long before they would be flying with the same skill as their parents.

In fact several minutes later I could see the four of them swooping (with joy?) high in the sky. I wondered if they feel exhilarated with their new found skill? Nature is amazing. How could birds, that were just learning to fly, suddenly have the athletic prowess and muscle development to take on such a feat? 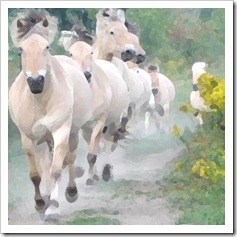 As I sat there on the swing looking at the barn and the overgrown sand ring I thought of the horses. On a morning such as this I would have stuck my feet into muck boots and walked down to join the horses in their pasture. I would have stood close to them stroking their silky hides, and breathing in their sweet horsey smell. Is there any better smell in the world? I think not. I would have been enveloped by their peace. Horses are like that you know, they have a spirit that extends beyond their being.

In all the years that I had them, they helped me through the rough patches of depression. There was something about being with them that lifted my spirits to a better place, if only temporarily. When I was home on extended sick leave the daily routine of caring for them brought structure and purpose to my days. If I hadn't gone back to work, with the pressures of having a full time job on top of everything else, I'm quite certain that we would still have a few (but maybe not 11!).

However, life being what it is, I sat there and enjoyed the memories, although in all honesty I did feel a pricking of tears in my eyes.

Last night we had Trudie & Leo over for a quick supper to thank them for all the produce. The pesto pasta was fabulous. I could have sat there stuffing forkfuls of the pasta into my mouth. Carm said later that he wanted to stick his face in the bowl - it was so good. And the salad with peaches, tomatoes, cucumber, basil and a bit of baby romaine was fresh and light. The grilled zucchini was a wonderful side, and they also brought a beautiful head of broccoli. Summer produce! And with the exception of the bit of peccorino romano cheese it was vegan too. 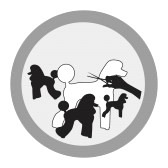 The big job on the agenda today was clipping and bathing the poodles. I had to get them all shortened up for our next camping trip! After that was done I wandered down the laneway to open the gate for the delivery we were expecting (see post about fantastic fan). A faint smell of apples ripening perfumed the air. So sweet. I lingered...

We often have a pita something or other for lunch - today I made a spread with a can of mashed black beans, a dollop of pesto mixed in (yum), sliced green onion, cubed avocado, and cubed tomato, gently stirred together. Spread onto a 1/2 pita with a handful of spinach packed in and it was a quick, easy and yummy lunch. Not exactly our usual fat-free lunch but boy was it tasty!

For the mind disturbed, the still beauty of dawn is nature's finest balm.
Edwin Way Teale