Saturday dawned clear and crisp, the perfect day for making Christmas cookies. We headed into my parents place with a double batch of shortbread dough and then spent the day rolling, baking and tasting. Mom made rosettes, a Norwegian Christmas treat ; Carole made the fattimand, another Norwegian treat; and I had the simple job of rolling out the shortbread. Juliette and Eric were kept busy decorating gingerbread houses. 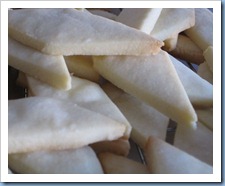 Juliette finished the day by washing all the dishes! And she’s just 9! 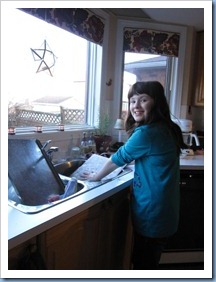 After a day of cookie making I was happy to get home to supper already cooked in the crock-pot - don’t you just love coming home and having supper all ready – gotta love that slow cooker! I’m sure we would have succumbed to unhealthy take-out, a pizza perhaps, but instead we ate a healthy, calorie conscious meal.

And then we finally watched Harry Potter and the Half-Blood Prince. What a great adventure series. Some parts were almost too exciting to watch (I’m a wuss). Whatever will they do for the next great series now that the last Harry Potter movie has been released. It was such a great series. The Adventures of Tin Tin (which both my brother and brother-in-law worked on) is being released in a few weeks. I can see that turning into a series.  Olaf is now working on the Avengers so maybe that will be the next great hit. Then he’ll be moving on to the Hobbit which will be the end of perhaps the greatest set of movies ever made.

Email ThisBlogThis!Share to TwitterShare to FacebookShare to Pinterest
Labels: family