In 1973,  when I was just 11, our family spent Christmas in Norway with relatives. I have sketchy memories of the time, but some things stand out in my mind.

The first place we stopped was cousin Harry's, just outside of Oslo. He picked us up from the airport, I remember it was almost dark and there were few cars on the road. Apparently he had to get a special permit to be driving as 1973/74 was the year of the oil shortages. We were put up in a room downstairs - I remember there were bunk beds - but what I most remember about that room was being woken up in the morning with mugs of coffee and hot chocolate and plates of sweets - this was unbelievable and most wonderful. 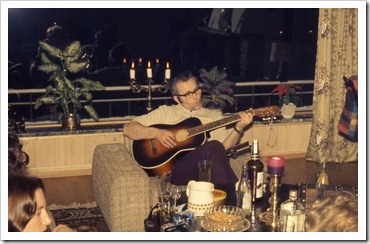 On one of the nights we were at Harry's he loaded us onto a dog sled, pulled by his English Pointers, and took us kids to a shows playing at the local community centre – I think they were cartoons. Another evening we went carolling and each house brought us in for treats. I had learnt the words to Silent Night in Norwegian so was able so sing along. 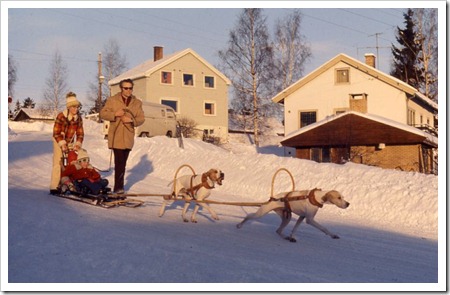 Eventually Harry (or was is someone else?) drove us up to Otta to stay with more relatives. I remember driving through tall forests of snow covered spruce (Norway Spruce perhaps?). I remember that it was snowing.

Once in Otta we stayed with a cousin (Ragna I believe) who lived just outside the village next to a farm with an old barn full of sheep. Everything seemed so different and such an adventure. We visited lots of other distant cousins, each one as hospitable as the last - my gosh those ladies could bake. Everywhere we went there were trays and trays of baked cookies and cakes. For a little girl with a sweet tooth this was some kind of heaven. 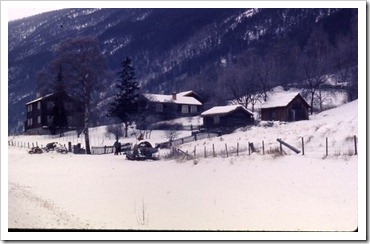 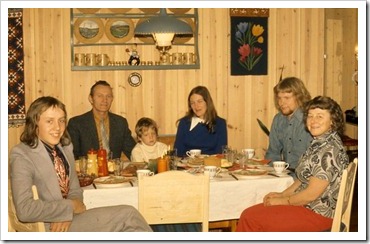 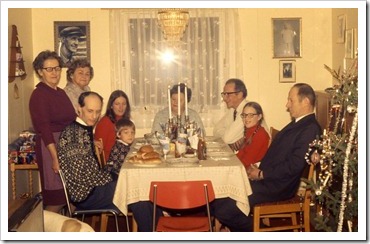 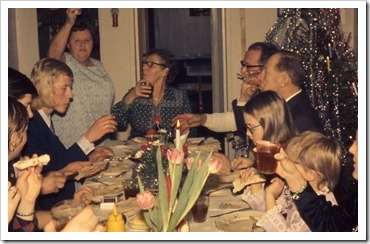 One of our outings took us to the old ancestral homestead. It was no longer owned by a family member, but it's buildings still stood - some for centuries. 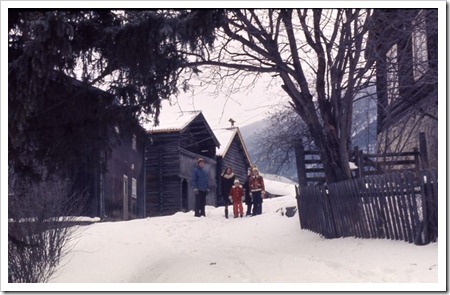 On Christmas Eve a large extended family gathered to celebrate. Just before we sat down to dinner there was the sound of sleigh bells on the front lawn and who should appear but Julenisse (Santa Claus). He had presents for everyone but we had the best one - a "spark" or sled with two metal runners. After the excitement had died down we sat down for a huge feast with reindeer meat (sorry Rudolf), lutefisk (cod soaked in lye), lefse (potato pancakes), and all the rest of the trimmings. It was delicious! 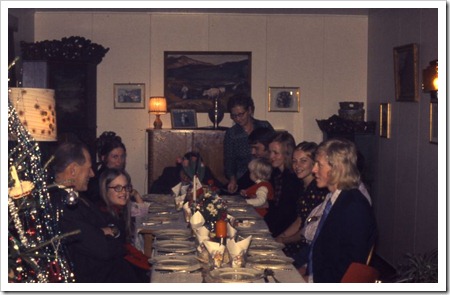 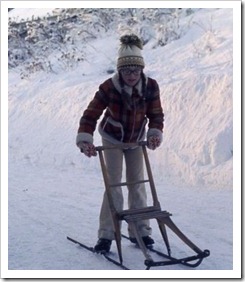 The next morning we loaded up a bunch of sparks and sleds and drove up a mountain. Then down! down! down! we sledded - we think we know how the sleds got their name - sparks would fly as a little pebble would get caught up in the runners. Oh what fun it is to ride...

My mom & dad still have the spark. 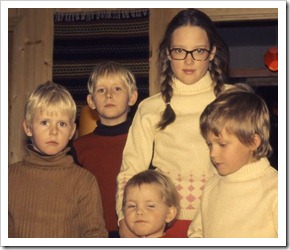 I don't remember much else of that Christmas... I suppose there was more visiting... we went to a little town to buy duvets. As it turns out we needed them BADLY for our stay in England (more about that some other day). We went to some Christmas concerts,  I got to know some cousins quite well - Tom Arthur and Espen - in fact one of them gave me the mumps! Somehow we managed to communicate with each other even though neither of us spoke each other’s language.

Most of the people we met we had never seen before. There were some cousins that had visited Canada a year or two before so we did know them (Julie, Ida, Ragna & Raghnild – I hope I got that right – it was a long time ago!). Even though the rest were strangers they treated us as treasured family members. They made us feel welcome.

To this day the smell of wood smoke in the winter air transports me back to those magical days in Norway. I can close my eyes and picture riding along on the back of the dog sled, the cold nipping at my nose, the snow scrunching beneath the runners. It was a wonderful trip made that much more special by the hospitality and warmth of the people that we met. 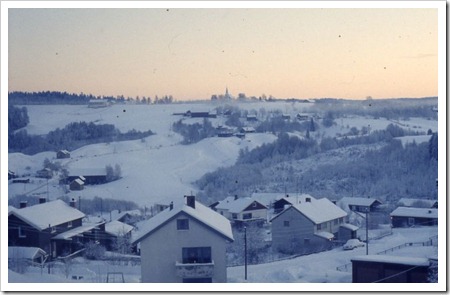 Merry Christmas and Happy Memories to All