Today was my first day back to the writing group this year. Since the exercises were finished in December, we are are starting back at the beginning of our guide book. Today’s topic was our ancestors. I had a lot of help from my parents as I was unsure of many of the facts. In fact I had so much help from them that much information had to be left out – another story perhaps?. 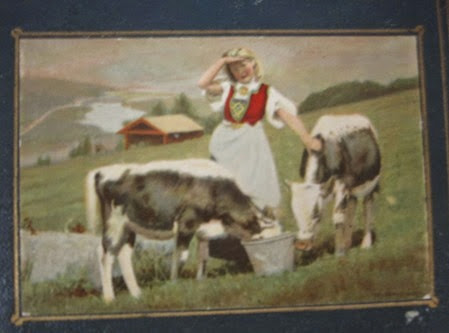 It was the early 1800s and an influx of immigrants were populating Canada. They came from all over: Norway, Scotland, England and Ireland. As they moved west into the wilds of Canada a few settled in Lanark and Iroquois in Ontario, while the rest were interested in the wide open spaces of the Alberta prairies.  These hardy people were my ancestors and through a series of twists and turns, marriages and births, their DNA came together and I was born.

History books have recorded the lives of some of my ancestors. My paternal grandmother, Ada Murphy, traces her lineage back to Catherine Fetterly Harkness, who watched the 1813 battle of Chrysler Farm from the cellar. Her experience is recorded in the museum at Upper Canada Village, which sits next to the battle site. With a young woman's spirit of adventure, Ada left her home in Iroquois, Ontario to teach in Alberta.

Also on my father's side, my grandfather's family traces their roots to the 1500s but are more recently mentioned in documents about the 1612 Battle of Kringen in Norway where my ancestor Audon Skjenna participated in an important battle.

The background of my mother's ancestors though not documented in the history books, is no less notable. It is known that John Watt born in 1771 and his wife, Mary Inglis, emigrated from Scotland to Lanark in 1821. In 2014 I visited the homestead with my mother and found a small stone from the original foundation which now sits on my fireplace mantle. One hundred years before my visit, after years of battling the intractable land, John's descendents sold the farm in Lanark, freeing my great grandfather to migrate west to the Rossington district of Alberta. My maternal grandmother, Laura Ada Watt, left the farm for Edmonton to work in the big city. In 1939, she was a telephone operator on the Royal train that crossed Canada with King George and Queen Elizabeth.

The Turveys sailed to Canada from England two weeks before the Titanic, settling in rural Manitoba. Family lore has Great grandfather Turvey working at Sandringham with the Queens horses before becoming a farm labourer and railway worker in Canada. My maternal grandfather, William Hector Turvey, left home as a young man, eventually stopping in Edmonton where he met my grandmother. Working in Eatons as a window dresser gave him a taste for retail, so after my mother was born they moved to Medicine Hat, Alberta where he opened a furniture store. At the young age of 56 my grandmother passed away, leaving my mother, just 16 years old, motherless.

It is said that the man who gave me my last name either crept up to the invading Scottish camp and killed the sentry dog, or rode a horse to distract the Scots from the ambush that was about to happen. For his bravery in the Battle of Kringen, the King of Norway granted him lands to augment the family farm.

Skjenna Farm (meaning place in the sun) is nestled in the Gundrandsdalen Valley of Norway with a mountain guarding its back. Several log buildings that were constructed in the 1600s still stand strong - they were built to last like the hardy Norwegians. The farm and family are mentioned in the Nobel prize winning 'Kristen Lavransdatter' books written by Sigrid Undset.
It was romance that moved my great grandfather Olaf from Norway in the early 1900s. His love was Mari, a milk maid.  Olaf's quest for adventure and a new life was amplified by his parent's disapproval of his wife, so the couple left the prosperous farm for North America, living in the U.S. for a time before ultimately settling in Buffalo, Alberta. The second Skjenna farm was homesteaded in 1913 and is still in the family. A hundred years later, in 2013, the extended family gathered for a huge celebration to mark the centennial.

Moving from a centuries old established farm to a tract of barren land in the desert of southern Alberta with only a sod hut for shelter was an act of devotion backed by hardiness and determination. Life was hard then. The area was sparsely populated and the town of Medicine Hat was a full 70 miles away. Crops and vegetable gardens would have been successful only by the grace of God - deep cold and wind in the winter, blistering heat and wind in the summer. Drought and insects plagued them. Water was precious.

My great grandfather visited Norway a few times during those hard years, but had made his home in Canada and didn't take over the Norwegian estate when his parents passed away. The farm was sold and is no longer owned by Skjennas. I was lucky enough to visit the farm, complete with its 500 year old buildings when I was a child.

The sod hut in Buffalo no longer stands, but Olaf and Mari's second house, a small 2 room home, is used as a storage shed. The third house, a two story with a couple of rooms on each floor, was dragged across the prairie by horses. Sheltered within its now frail walls is a trunk full of my great grandfather's diaries. Eight children blessed Olaf and Mari's home. Some were born while they lived in the U.S.; my grandfather, Art Skjenna, was born in Buffalo.

Childhood sweethearts from their high school days in Medicine Hat, my parents forged a bond that has lasted since 1962. Bringing together backgrounds from England, Scotland, Ireland and Norway, they had 4 children, including me.

My fore-bearers endured many hardships while creating a new life in Canada. I am grateful. 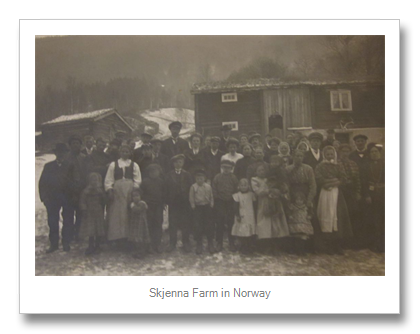 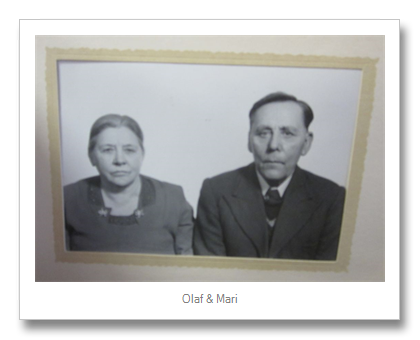