We Knew it Had to be Ours

When I looked out the window this morning I could see that the creek was in flood. You might wonder if we are worried especially given the new reports of flooding in Australia. But we aren't - our land floods every year, and we actually bought it during a flood.

Years ago I was on the quest for a farm. I wanted horses SO BADLY! I wanted an acreage, I wanted land. We looked at countless homes but none of them were what we wanted. Most of the acreages had old, run-down houses, and there was no way that Carm wanted to go that route. So we kept our eye open for vacant land as well. One day I saw an ad for 28 acres that flooded in the spring - I mentioned it to Carm but he wanted no part of it. Our house at the time was on very low land, and every spring the sump-pump went for weeks - he wanted out of that basement flooding trap. But if you know me you'll know that I can be PERSISTENT. Annoyingly so I'm sure. Finally Carm gave into the pressure and we took a drive to see.

As soon as we set eyes on the place we knew it had to be ours. You see, a few years earlier we had been driving around and pulled the car over to look at a pretty piece of land with a creek snaking through it and a river on one side. It was so pretty. There was a for sale sign on it, but when we called it had already been sold. We weren't in a place financially that we could have bought it anyway. But when we were finally able to start shopping this piece of land was always what we had in mind - nothing that we saw measured up. And now here we were, standing on it, with the for sale ad in our hands. It was spring and the creek was in full flood  but we could see that 1/2 the acreage was high and dry. No worries about a wet basement here - there was drainage. The land wasn't flat, it was contoured. After one last stop on the little bridge to watch the ducks swimming in the creek we were on our way to the real estate office. Bad news though, there was already an offer in on it. So we made a full price offer and went home to chew our nails. Later that night we got the phone call - they had accepted our offer.  It was ours. 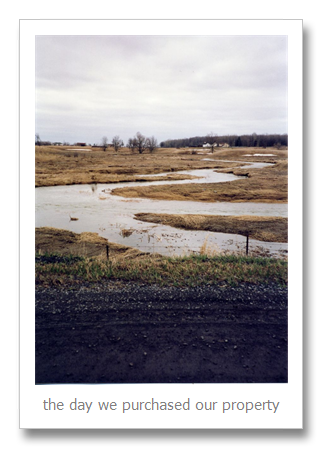 I can remember how excited we were, we couldn't keep away. In the year before we built our house we had picnics here in the summer, we snowshoed in the winter, we planted 1000s of trees in the spring. I remember one evening we had come for a picnic with the dogs. We hiked from the top corner of the hayfield over to "homestead" hill and had a lovely evening. On the way back to the car Chetta (one of our dogs) was skunked! Yikes - a 20 minute drive with a skunked dog in the car.  The first summer we put a picnic table over on a plateau just below homestead hill. When we were snowshoeing that next winter we'd stop there and have a hot chocolate. The next spring we had a particularly bad flood and the picnic table was gone. We were impressed by the power of our little creek! 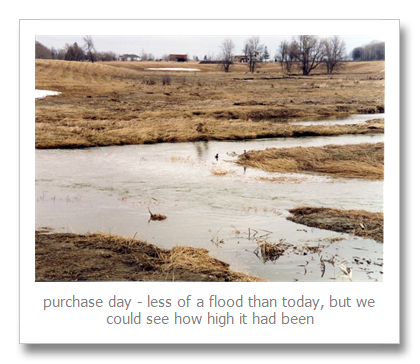 I can’t even begin to put into words what having this land means to me. When I walk on it I feel the strength of Nature fortifying my soul. A mindful awareness connects me directly to the Earth. There is something so spiritual about being in touch with Nature, be it feeling its hard earth beneath my feet or looking up and seeing the stars at night.

Today there was no ice jam like there often is in the spring, just high water. Our walk in the lower pond paddock takes us along the creek for a bit, but is high enough to be out of the flood waters. We are careful to keep the dogs close to us and away from the water because we know the power of the current. And today we remembered the day we made it ours.

After that trip to the past I tackled the pantry. More organizing. It doesn't look much better, and the pile of stuff to take down to the basement is bigger. 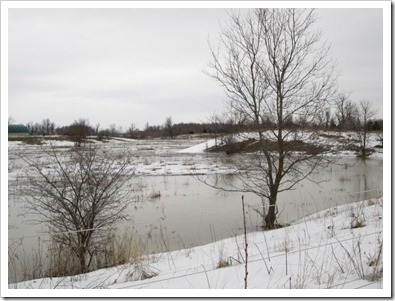 I go to nature to be soothed and healed, and to have my senses put in order.
John Burroughs