Gosh, the last few days have gone by quickly - I can't believe that it is Monday night already!

I'll go back in time to Friday night when we arrived home from our adventure. It was just getting dark when Carm started backing it down the laneway - it took a few tries as the difference in length changed the turning dynamics a bit. But he got it nicely situated and level. Then it was time to winterize and unload the stuff from our trip. Fed Grace and the dogs after which I collapsed into a hot bubble bath - heaven! I was so exhausted that I was shaking and my head was fuzzy. A yummy sandwich while watching the news energized me enough to start loading a few things onto the camper. 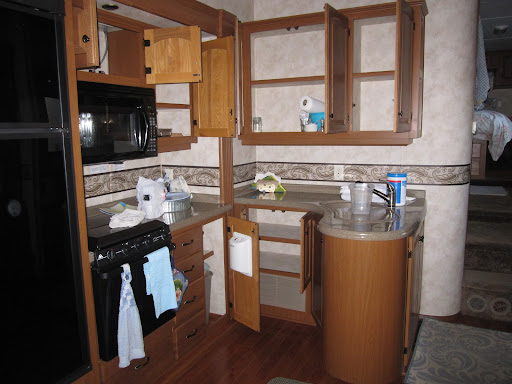 I started with a really ugly carpet - just to protect the floor while I piled boxes onto it, and then box after box. Honestly though there weren't that many boxes moved... 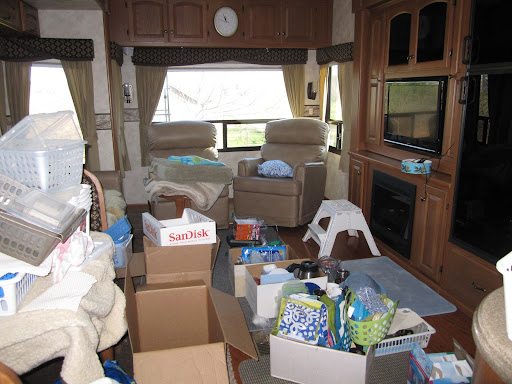 Saturday I worked like a demon all day. And miracles of miracles most stuff fit! There was much arranging and re-arranging as I figured out the best place to put stuff. I like to use plastic bins to organize stuff in, but I can't tell you how many times the container wouldn't fit in the spot by 1/4" - arrggh! All turned out pretty well though and I even have some empty spots :-) My next task is to take recipe cards and write an inventory for each bin to affix to the front of it. Maybe I'll be able to find what I'm looking for... but for sure Carm won't! Maybe a master plan/map would be a good winter project. I was too exhausted by the end of it all to insist on eating supper out there. 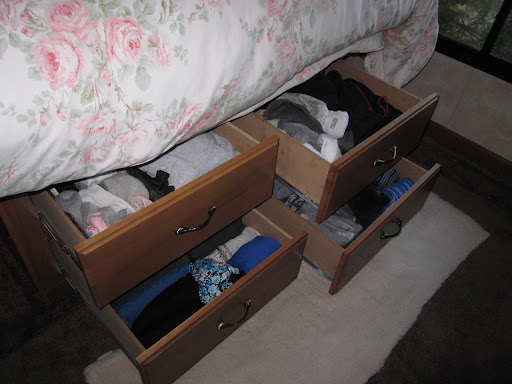 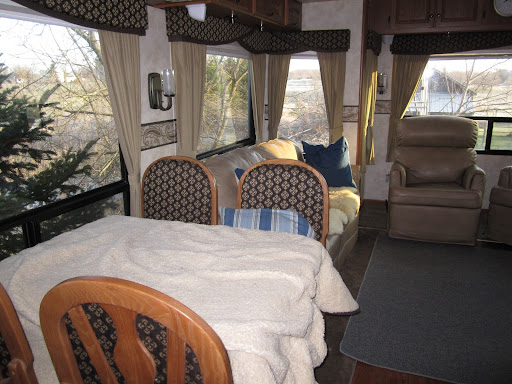 Sunday I finished up and then vacuumed, got rid of the ugly carpet, put out some nice pillows and generally made it look like home. I was happy :-) 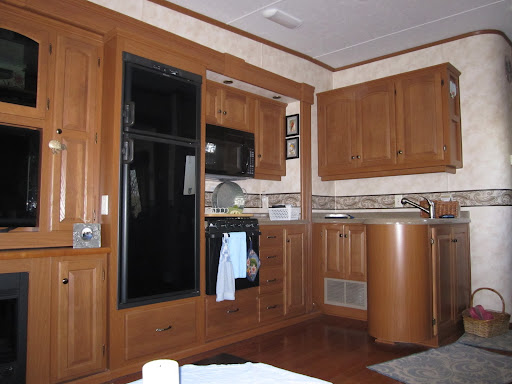 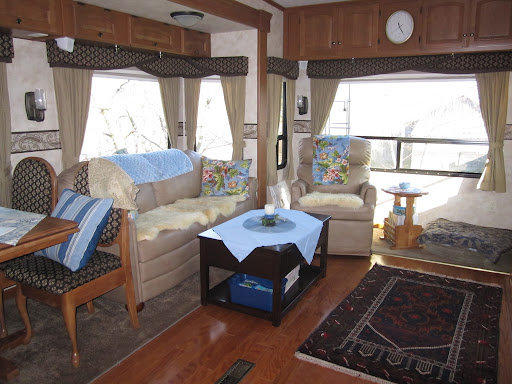 And then decadence... we met my brother Graham, his wife Carole and their two kids, Juliette and Erik, as well as my aunt Kari and Trevor at D & S Southern BBQ. It was fun to see everyone, but boy oh boy the food. I went wild and ordered the Mini Determinator, which is basically a hamburger with grilled cheese instead of a bun, and with brisket, back bacon, bacon, cheese, onion rings and perhaps the kitchen sink. It was good, but I was only able to eat one quarter of it! Graham ate the other quarter and the rest came home with me for my lunch (I could only eat 1/4, so maybe I'll finish it off tomorrow). Do the calories count if you eat them on another day? Anyway, it was pretty tasty, but also very fatty. Next time a salad. Oh, and maybe a few of those deep fried Mac & Cheese balls. (so much for low fat plant based healthy foods!) 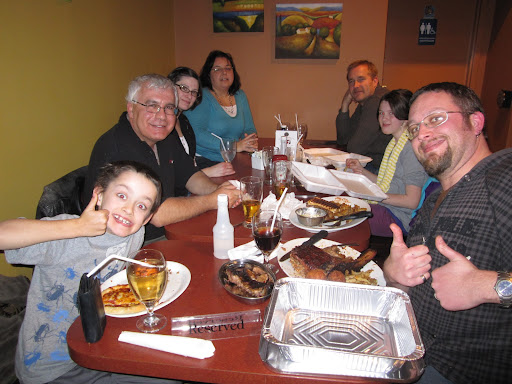 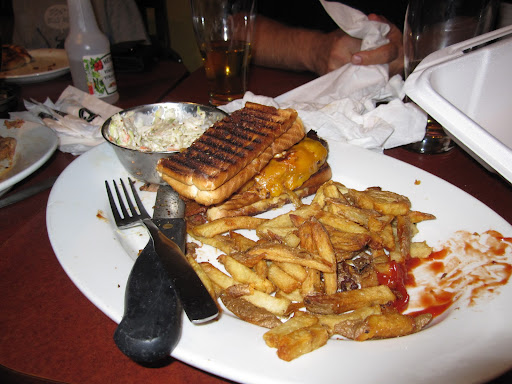 When we got home from supper there was a message from Trudie & Leo so of course we called them up so we could show off our new digs.

Today was a quiet day for me. Carm went into town for a dentist appointment and lunch with his mom while I putzed around - and napped (I snuggled under a blanket on the camper for my nap). There have been far too many days of excitement and not enough rest. I have to watch this or I may trigger a mood event (if I haven't already).


The camper is starting to feel more like home, especially as I get some of our stuff into it. It doesn't seem so impersonal. It is pretty darn nice. There are things that I didn't notice when we bought it, like the number of lights. In the bathroom there is a general fluorescent over head light, as well as a 3 light fixture over the vanity. The bedroom has two fluorescents and two pot lights over the bed, and two lights in the tv (I'll have to get a photo of the tv it the bedroom - it is mounted over the bed and then hinges down for viewing. It even has a built in dvd player). The living room has a myriad of options as well. It's just crazy! But with the right mood lights lit, and the fireplace flickering it is really, really nice.