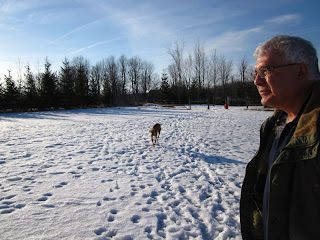 Hurrah! Spring is surely on its way as a flock of Canada Geese have settled into the flood plain of our creek. This is the earliest I've ever seen them here, but that might be because I'm home during the day to see them. Hurrah hurrah! I even saw an insect crawling around on the melting snow. And Carm says that he killed an earwig. Spring has almost sprung :-) 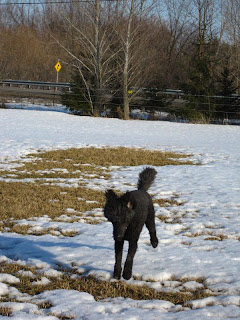 Today's word of the day is continual (kun-TIN-yoo-ul adjective - 1: continuing indefinitely in time without interruption ; 2: recurring in steady usually rapid succession). The continual demands by the dogs to go outside finally got us out of the house. We had been waiting until the Diabetes Foundation came by to collect the used clothing, but they hadn't shown up by mid afternoon so we just traipsed out with dogs on leash. The day was an astounding spring like day - it was +5C with a blazing sun. What a taste of what is to come. The winter has actually flown by so its almost a surprise to see these springy sights.
My pleasures today: being outside in the lovely almost spring day ; seeing the grass in the hay field start to be revealed ; planning the sewing for the camper that I'm going to do with the new fabric that I got yesterday ; eating crunchy, sweet sugar snap peas - they are almost like candy but they are good for you ;
--------------------------------------------------------------------
31 Day Challenge today is "something that bugs you".
Grocery carts. Grocery carts left in the middle of the parking lot. I mean really, how hard is it to put the cart into one of those corrals rather than leave it to take up a parking spot or worse still bang into adjacent cars. It happens a lot in our local village, more than in the city - I don't know why (although I have a few ideas that won't be discussed here).
Commercials on TV are another thing that bugs. We've taken care of that by getting a PVR that works with our satellite service. Its great :-)
Grocery carts left in the middle of the parking lot. Oh, I said that one already.