Last night we had a good time with friends from the neighborhood. I meet Laurie years ago from a horse list on the internet. It turned out that she lived just around the corner from us and that we shared some other interests, including a love of Irish Wolfhounds. We've been friends ever since. Its a funny thing about Irish Wolfhounds, of the women that I have kept in touch with over these many years, four have had wolfhounds in their pasts or present. What are the odds! 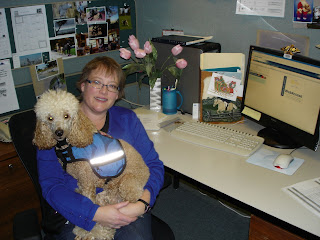 Today's word of the day is tutelage (TOO-tuh-lij noun - 1: an act of guarding or protecting ; 2: the state of being under a guardian or tutor ; 3a : instruction especially of an individual b : a guiding influence. As Spike and I got ready for him to become my Service Dog (SD) we were under the tutelage of Cheryl Smith from Forever Friends Dog Training School (link). She helped us to address Spike's excitability around other dogs, and also helped us to practice some other important skills like loose leash walking, recall, greeting other people with dogs, etc. Through her school we passed the Canadian Canine Good Citizen test which was one step to becoming a certified SD. In Canada and the US a dog does not have to be certified, but does have to meet a basic code of behavior for public access and perform 3 tasks specific to your disability. Also, in order to qualify for a SD you need to meet certain medical conditions to show that you need one, and you also need the blessing of your doctor and a letter to go with it. 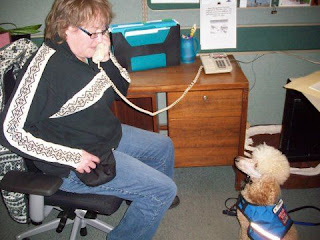 Spike started coming to work with me in December of 2009 and continued on until May 2010. He was a great help and got me through what would have been a rough winter. His tasks were to provide tactile stimulation to advert a mood change, bring me medicine, he was learning to find Carm in a store for when I'd get disoriented, and there were some other little things that he did for me. A side benefit was just keeping me centered and "in the now" while with him - in other words I didn't need him so much when I had him.
Having a SD is not for the faint of heart - its a bit scary putting yourself out there. You can expect a million questions everywhere you go, including people wondering what's wrong with you - and asking you outright. This gave me a good opportunity to advocate for bipolar disorder. If I had been shy and retiring this attention would have been disastrous, but as it was I think we helped move public attitudes forward. After all, to everyone, except those who know me best, I seem a regular, articulate, "normal" human - not some scary person with a mental illness. In all the hundreds of people that I spoke with in those few months I would say that all but a few were 100% supportive and understanding - it really was amazing to feel the kindness of strangers in such great heaps.
The other thing with having a SD is that he's with you all the time and while this may seem great there are times when it's a bit of a hindrance. Want to dash out for a quick bite to eat at the local restaurant - the dog comes with you. You have to make sure he has somewhere to lie down, and also that his behavior is exemplary. Same with going into a store or any other public venue. I tend to worry about offending others, so having a dog in tow was an added stress.
Having him at work was fantastic. People were so supportive of his presence - it was amazing. I believe that part of the reason that I'm doing so well now (I'm the best I have been for years and years) was the support and understanding of so many people, from strangers off the street to good friends and co-workers. And of course I can't forget the help that my little buddy Spike gave me through those long work days.
My pleasures today: remembering Spike at work ; getting up and finding that Carm had taken care of all the supper dishes from entertaining the night before.
Posted by Laura