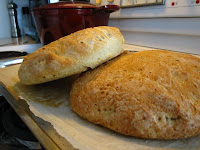 I made a Moroccan style stew today in the crockpot - butternut squash, eggplant, zucchini, onions, red peppers, mushrooms, etc. I served it over couscous with a Moroccan bread that I made on the side. The bread has some aniseed in it which gives it a lovely flavor. The smell as its baking is intoxicating. A nice, warm comforting meal for a cold, grey, snowy winter day.
My not-so-idle pleasure today was kneading the bread. It made my arms ache with effort but there's something so real about making bread. Taking a bunch of flour and yeast and turning it into warm crusty bread just can't be beat on the fulfillment scale. Its so "mother earth" feeling - I should have been wearing tie-die. 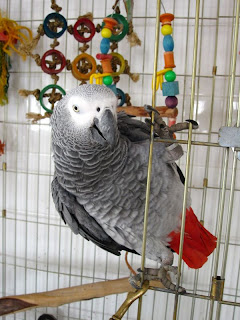 Today's word of the day is dander (noun - dandruff; specifically : minute scales from hair, feathers, or skin that may be allergenic ; anger, temper). This is an easy one for me since I have a pet that produces copious amounts of dander. Grace has a powder gland that produces a substance that she rubs over her feathers. This makes her almost waterproof - just try to get her wet in a bath - the water beads off her back. Unfortunately the powder (or dander?) also gets everywhere else near her cage. She's worth the extra dusting though. Especially as she asks "whatcha doing?" when I pick up the dust cloth. One cannot help but smile :-)
I'm reading Committed by Elizabeth Gilbert (on my e-reader of course!). Its not bad so far - I'm just on chapter 4 - but so far its not really what I was expecting. Its more of a history of marriage and its meaning as opposed to her own personal experiences. Did you know that the Catholic Church was once against marriage, actually against men and women being together all, in other words no sex allowed? They felt that they could get all the new Christians that they needed by converting the heathens. Quite an enlightened bunch wouldn't you say! 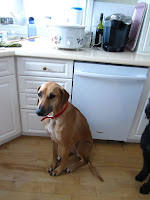 Kabira sat tending the crock pot all day. I don't know what she was expecting, but the pot was in the same counter location that I use for preparing their supper. Maybe she thought it was ready already!
Posted by Laura